Home/School of Military Divers/Report/For the first time ever! Recruits dive…

For the first time ever! Recruits dive to a max depth

A popular TV host would probably call it ”terrible!”, but we just humbly tag the event as “unprecedented”. It is for the first time in history of the Ukrainian diving training that recruits would dive not just on the paper but in real deep open waters. So let us start from the very beginning. 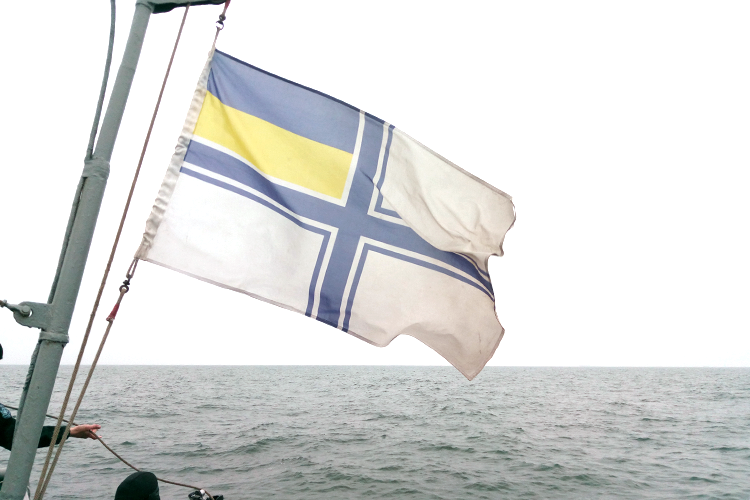 The main achievement of our joint volunteer project named The School of Military Divers lies not only in the honor of replenishing conventional army supplies or arranging local exercises for individual divers: from now on, we are going to exert influence on the processes of divers’ education and training globally. Now in partnership with the state institutions! We have started to co-operate with the Navy Diving School within which the best officers of the Ukrainian Naval Forces along with the skilled volunteers well versed in diving, got to work together. All of them are focused on the target-oriented approach which must result in professional training of skilled divers, not on mere formalities or paperwork. 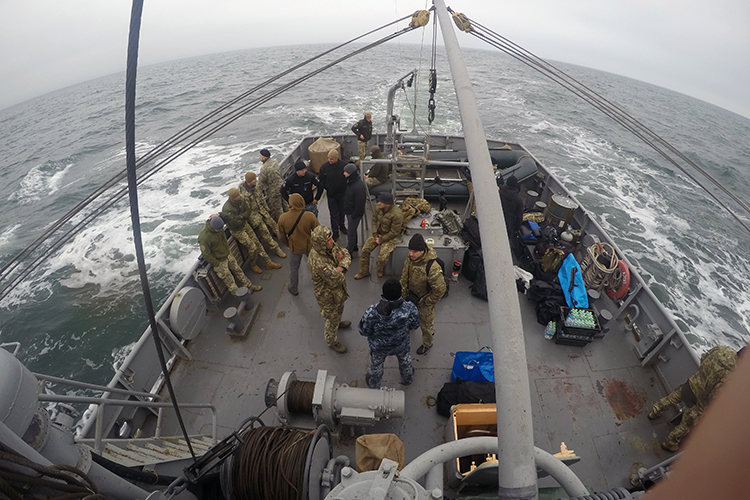 Recently, the first year cadets have graduated from the Diving School. This group of divers have been trained under a brand new program partially drawn by the School of Military Divers’ teaching staff. Practical training has to become one of the key purposes of the course as apart from theory, divers must perform real undersea missions and dive to maximum depths in open waters. 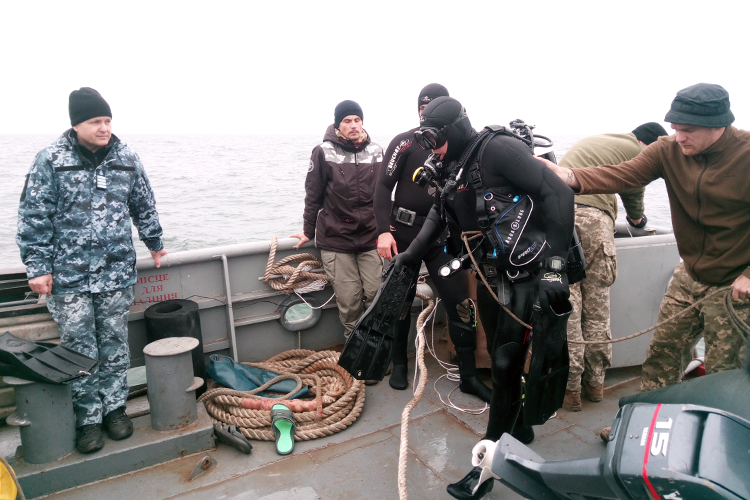 Unfortunately, in previous years divers used to go under water only “on paper”. What does it mean? As a result of exercises, a diver got an official permission to perform works at up to 60 meters depths. But in reality, divers possessed practical experience in diving to much lesser depths in safe shallow waters, perhaps up to 10 meters. So irrespectively whether one had proper skills or not, he had to dive to a maximum depth at his own risk. But this time it was different, and the divers trained to dive to 30 meters depth. According to the newly approved program, divers must perform at least five such dives during the training course. 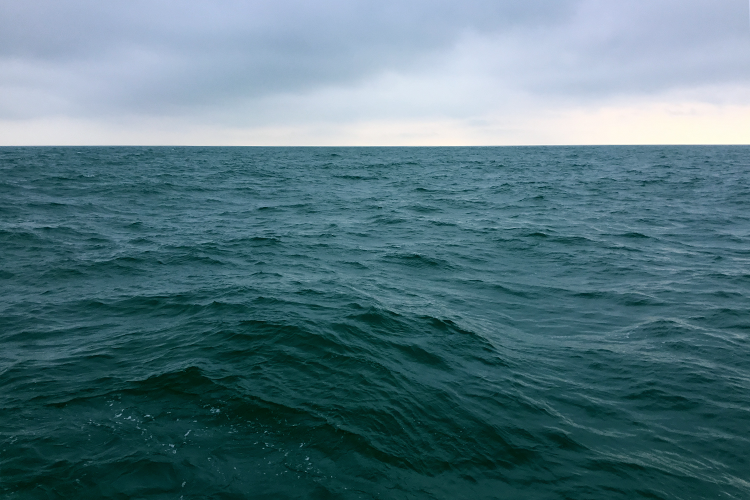 This is the Black Sea which doesn’t really look that “black”. That day it was rather rough

They went underwater from the Netishyn – it is a special diving tag that some time ago was restored thanks to the joint efforts of both the government and the volunteers. At full force, the Navy Diving School staff headed to the designated area of the sea with bottom mark of 30-meter depth. Just imagine the conditions at cold high sea where you have to go underwater to a depth equal to a twelve-storey building’s height …yikes! 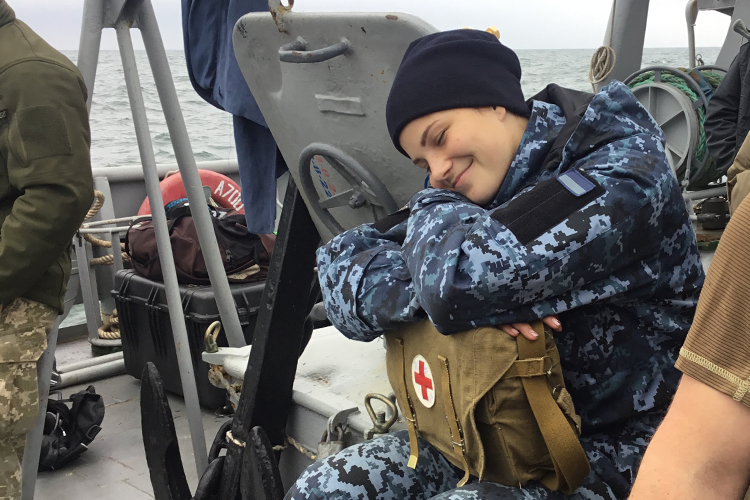 Kateryna, MD. Her presence at the spot is necessary, even if medical aid wasn’t required this time (luckily)

Having arrived on the spot, they immediately installed a diving station and got a decompression chamber pre-set. The divers went underwater in threes: two recruits and an instructor. In general, seven pairs of recruits performed their dives on that day. By the way, as soon as we mentioned a hyperbaric chamber: it was set ready in case of a possible emergency ascent when a diver would need to get to the surface fast. In normal situations, rising from such a depth must be performed with obedience to strict decompression rules. According to carefully calculated diving tables, the recruits got to the surface with all mandatory stops, so the ascent took them about 20 minutes each. Just have a look at the pictures below. 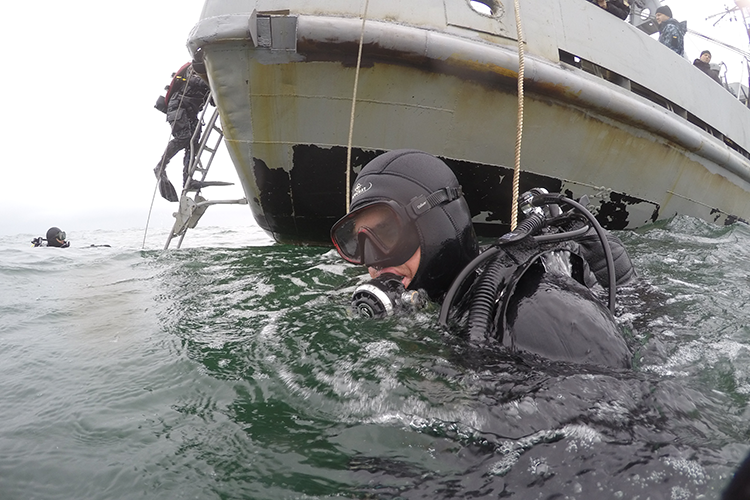 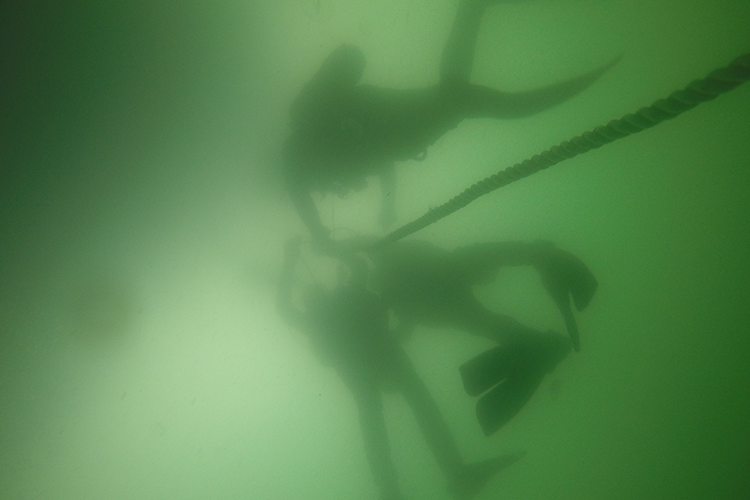 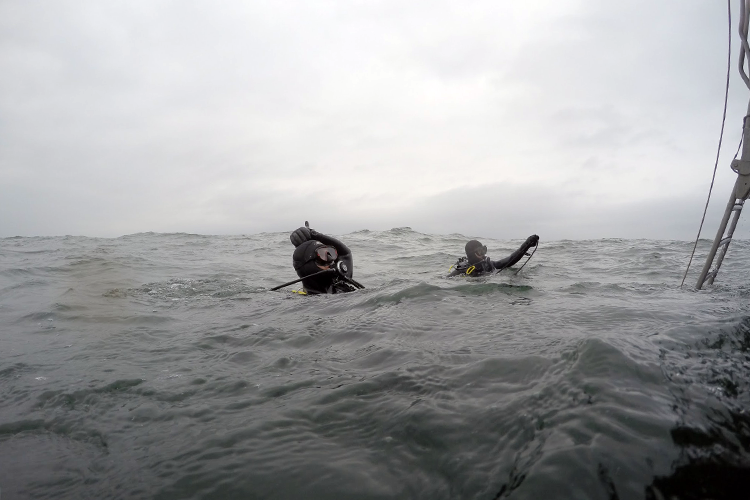 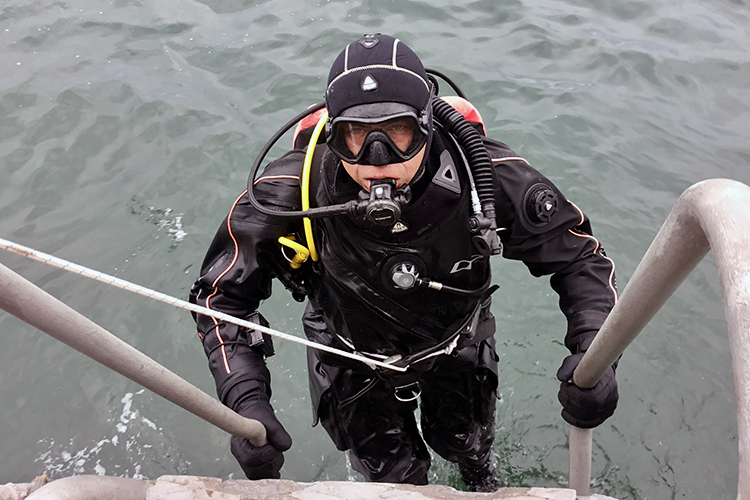 Chief warrant officer Viktor Ozarenko, an experienced submariner who has been serving in the Navy since the Soviet era 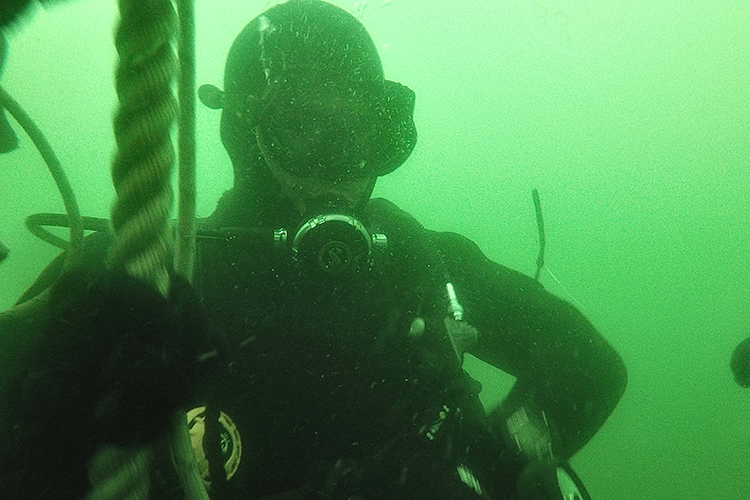 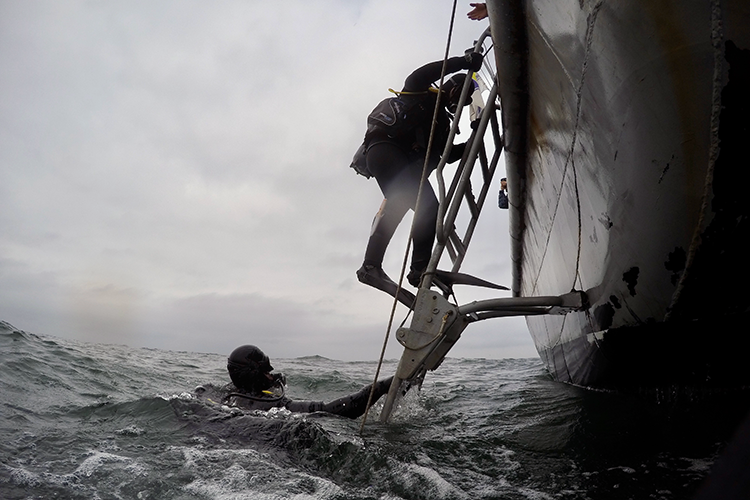 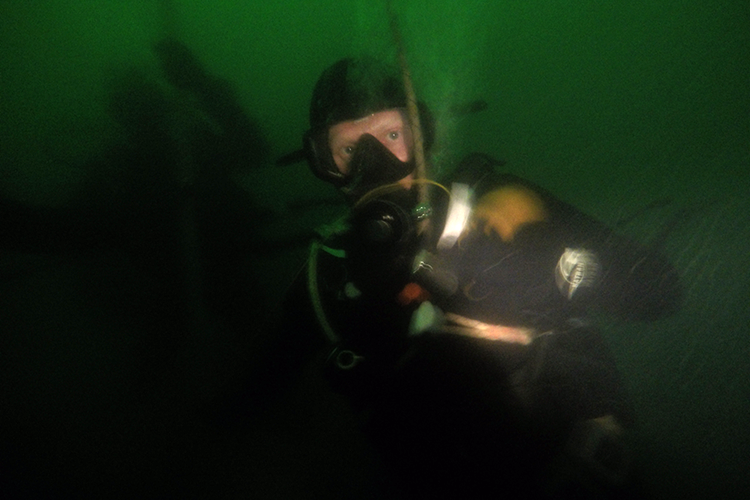 This is Yevhen Kobets who is currently a recruit preparing to join the Navy Diving School’s tutoring staff soon. By the way, it was he who participated in the rescue mission near Odesa in the recent accident with a sunken tank vessel

And to fend off any speculations regarding the School of Military Divers instructors’ possible role as proficient theoretics who can only give useful recommendations and do their paperwork solely: nothing of the kind! This time, their staff instructor Kostyantyn, a founder of the School, descended underwater along with three pairs of his students as well. And all the impressive undersea pictures you can see on this page, have been taken by him. 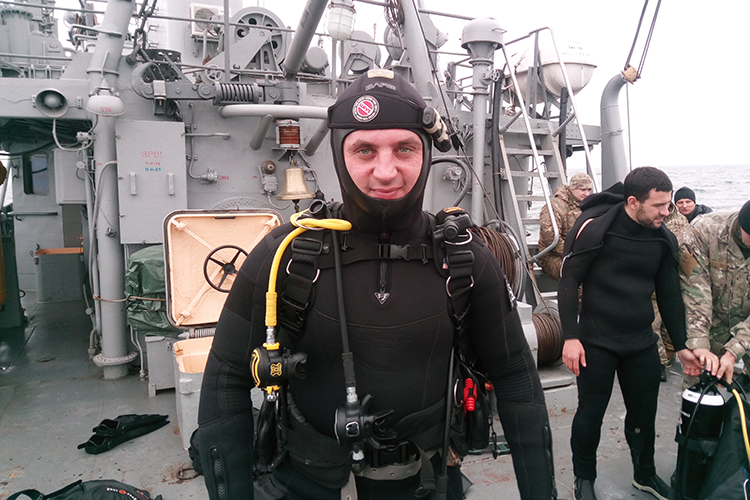 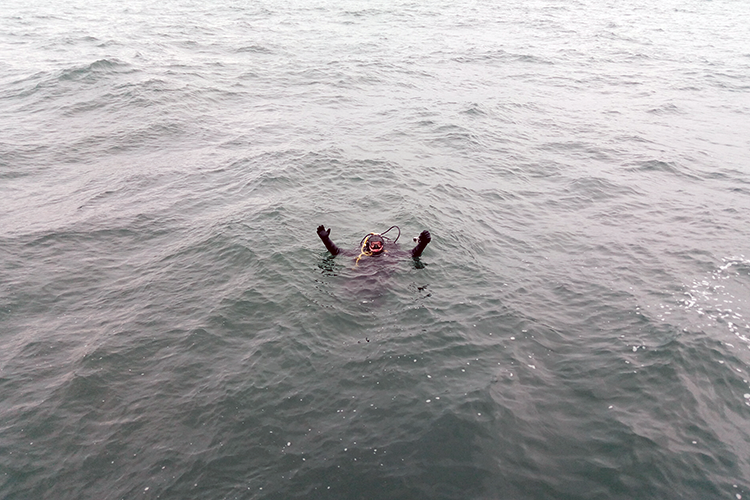 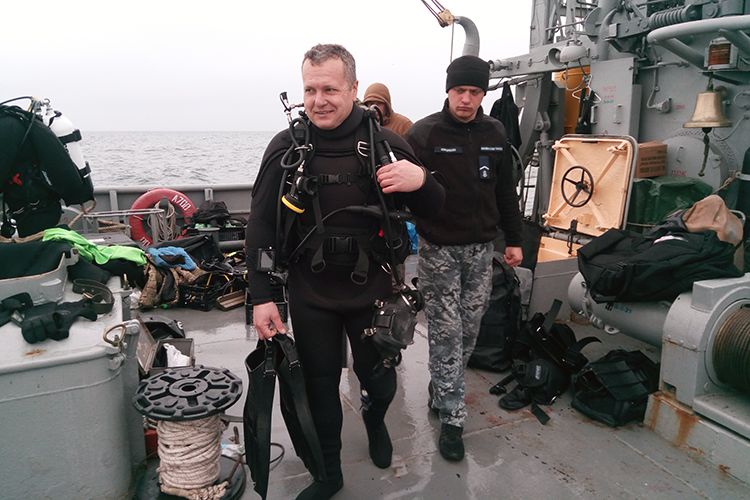 In addition, this time, despite the fact we’ve already got used to see him in his Commander’s uniform, the head of the Diving School Serhii Tytarenko dove with the recruits, too

The training lasted until late night, so its final dives ended in the darkness. On top of it, the staff cook prepared a hearty dinner for the whole crew which was supported by the American field ration. Still not everyone could enjoy their meal as due to many hours spent at sea, and substantial physical effort some of the divers preferred to take some rest bending over the bulwark and enjoying the sunset. 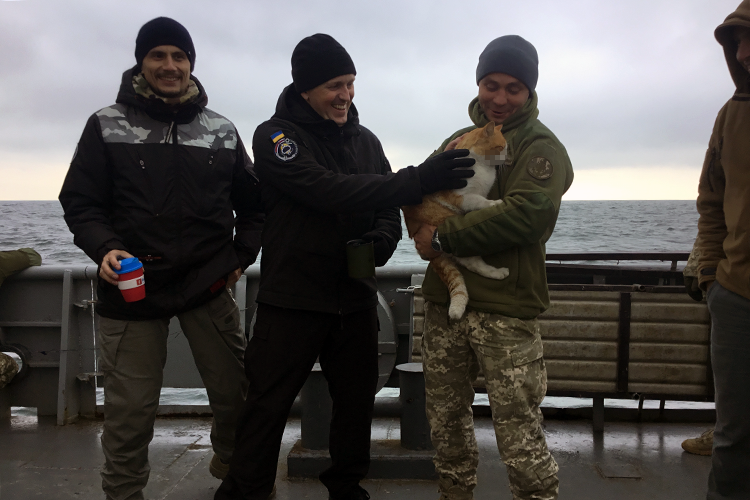 In this picture, you can see the School of Military Divers instructors, honored veterans and volunteers Maksym Yakymov (in the center) and Yurii Pysarchuk (left), as well as the Netishyn staff cat. He was definitely among those who enjoyed the exercise the most!

As a result, everything went according to the plan. The students who successfully completed the course, will now head back to their military units, while new recruits will replace them at the School to master their underwater skills. Accordingly, our task is to support them with everything they need to meet their training expectations and goals. Right, it is the government that has to supply them with all the necessary stuff, still as practice proves, there often are certain shortages in it. Besides, the situations that require prompt solutions, occur rather often, as well. For example, they need to rent a pool to master their diving techniques, or buy some lacking essentials not specified in the budget. Logically, training of new professional divers shouldn’t get impeded by anything, so both we, the volunteers, and the divers count on your support within the School of Military Divers project. Dear friends, come join in!