Home/School of Military Divers/Report/Here’s the finale: first recruits have graduated…

Dear friends, wouldn’t you mind if we took you backstage once again? If yes, we’re going to tell you about the event that seems had little coverage in the media, and disclose more details about it. 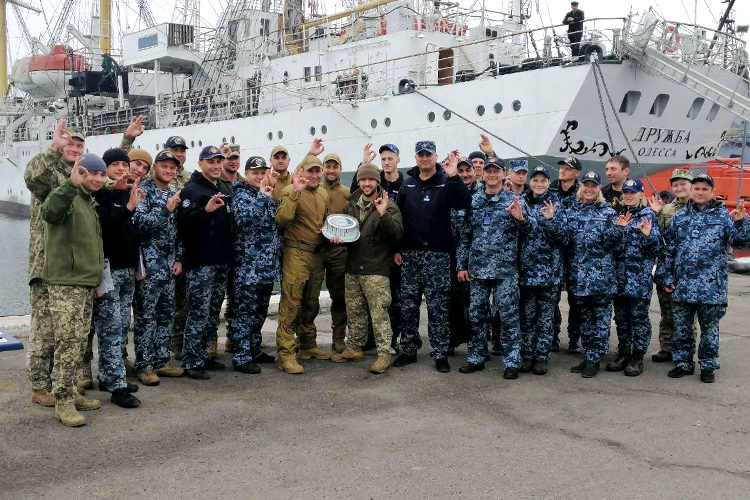 While we were witnessing their progress, the first intake of recruits of he Ukrainian Navy Diving School completed their first training course. Hence, from now on the forces engaged in defense of Ukraine’s independence as a state, have been strengthened with a few more unique specialists. Shortly, the graduates of the Navy Diving School will come back to their units. By the way, Navy frogmen, police officers and even State Security Service officers were among the first students, so you can imagine how much their skills will add to their units’ defense capacity! A basic course of the Navy Diving School has been designed to improve organizational knowledge applicable in simple diving works like search and rescue, inspection and installation missions at up to 30m depths; to master handling of the autonomous lightweight diving equipment (aqualungs) and to improve adaptive techniques necessary for working in underwater environment. 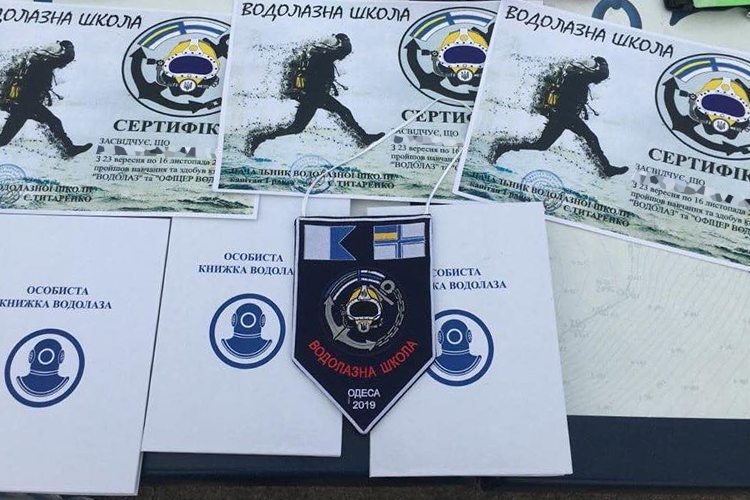 The Navy Diving School recruits have been trained under the new program developed with participation of the volunteers of the School of Military Divers. And despite they have already been qualified as divers, in fact they took only the basic initial course after which they will be able to improve their skills in subsequent specialized training courses and get the specialties of a diver miner or a special purpose diver. The program was designed in such a way to optimize the resources and to train the specialists in clearly specified particular fields. For example, in NATO countries training course in rescue diving specialty takes about 6–8 months and implies mastering of three different types of diving equipment as well as various skills in complex works at the up to 60m depths. In turn, a non-stuff marine diver does not actually need such diverse knowledge as his tasks mostly lie in smaller routine maintenance of the ship systems at the depths not exceeding 10m. Logically, such a specialist should be trained within the minimal basic program. 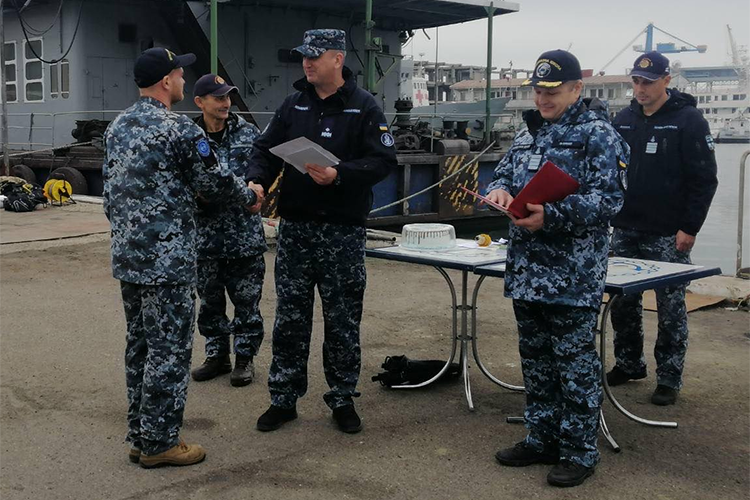 Head of the Nakhimov Naval Academy, First Deputy Commander of the Naval Forces of Ukraine, Rear Admiral Oleksii Neiizhpapa congratulated the graduates and handed them certificates

The very graduating ceremony actually went in two stages: first the recruits performed the first super deep dive in the history of the Ukrainian Naval Forces. We’re going to tell you about this event very soon. Second, in the course of the less official part, a new tradition has been initiated: a fresh graduate is being “greeted” by slapping with a fin on his lower back. Well, you can see the rest with your own eyes: the MOD Breeze TV channel has filmed an exciting story covering the event. 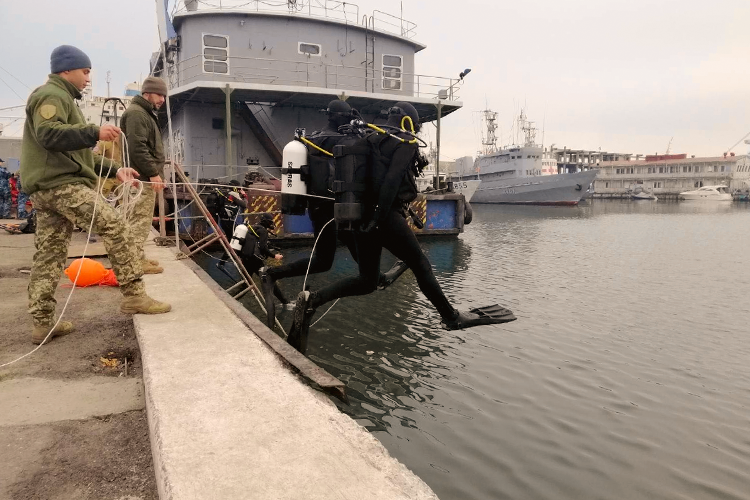 On this dark yet good day, the recruits got their certificates, their commanders’ appreciation as well as bright and positive experience in general. The graduates were also given a cake which they had to cut with the knife… thrown into the sea by their commanders! So the cadets had to unfold their diving stations and perform their first dive not as students but as professional combat divers, shoulder to shoulder with their tutors and coaches. This ritual is to become a new tradition that is going to be observed by each new graduation of future cadets. 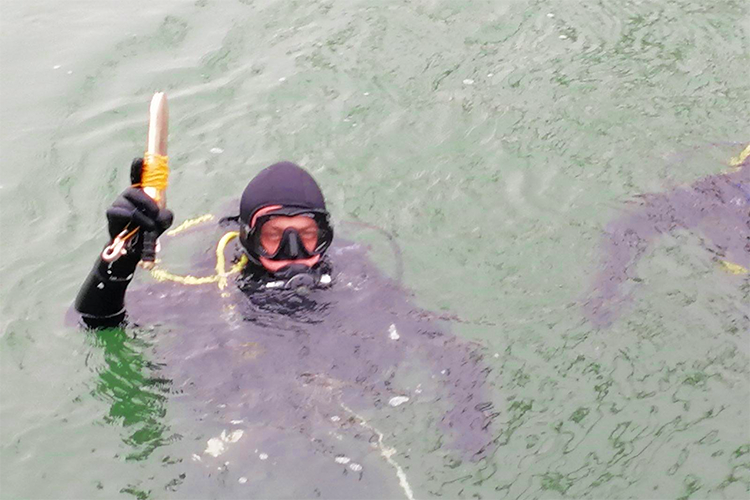 Good friends of ours (well, there is hardly a diver who wouldn’t be our friend!) also got sincere appreciations and corresponding awards. Both senior staff and instructors of the School of Military Divers volunteer project who actively participated in both its launch and further intensive cadet training, were also celebrated at the event. 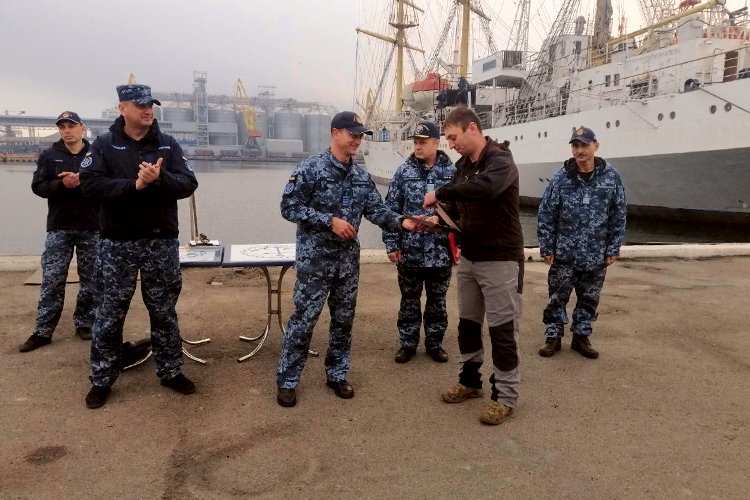 Head of the Search and Rescue Service of the Armed Forces Navy Command, Commodore Oleksiy Nesterov congratulates an energetic volunteer, military diver and co-founder of the School of Military Divers Kostyantyn Myrhorodsky

And this is not surprising as the guys have been actively supporting diving units and supplying them with up-to-date equipment; it was them who stepped up and developed training programs for the Navy Diving School and, later, in the course of training, Tok up tutoring and training of future divers. As each diver beginner has to possess adaptive skills necessary for his work in the undersea environment. The program of special physical training lasting 42 hours, has been designed to pursue this very goal. Previously, there was no such program in any domestic diving training programs. It should be reiterated that the program has been run as an entirely volunteer project, at their own expense. So we have to send all gratitude and our respect to Kostyantyn Myrhorodsky, Maxim Yakymov and Yuri Pysarchuk who definitely deserve it! 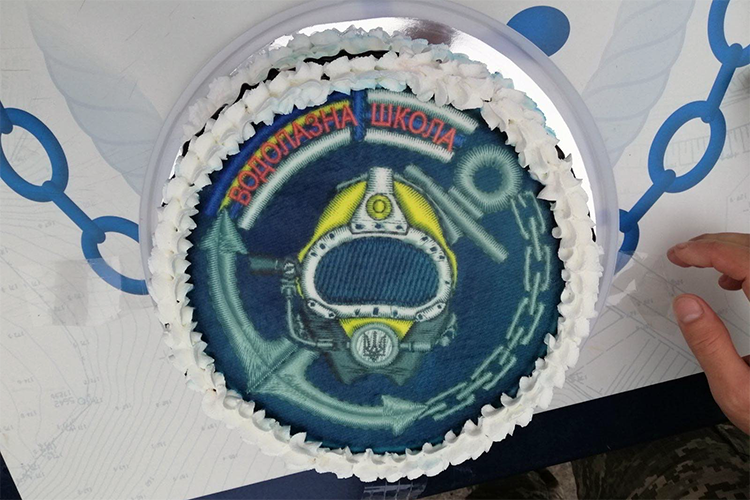 Despite the fact we continue the fundraising within our joint School of Military Divers project. The first course given by the Navy Diving School has demonstrated the aspects where we can prove truly supportive. It is about certain equipment and operative needs that can be most efficiently satisfied at the expense of volunteers. And, quite soon, it will go to restoration of a diving vessel passed to the Special Forces by contributors: seems we will need to find money for its repair. The guys from the School of Military Divers have already spent tens of thousands of their own money for purchase of necessary consumables, so now we have to raise certain amount to pay for the restoration works. And this is where everyone is able to help. As the sum does not look that astronomical, any affordable input would be highly welcome.

Would you agree that diving means more than just a rare and exciting activity.

After all, it is a strategic issue on which our home country’s overall protection depends.