Main news as at morning of March, 9th

? Over the past 24 hours the Ukrainian military recorded three hostile fire attacks. Near Luhanske, the enemy used large caliber machine guns, and near Avdiivka they deployed mortars. Unfortunately, despite the small number of attacks, one Ukrainian defender was killed.

? According to the information spread in the social networks, in the temporarily occupied city of Horlivka another case of suicide took place. A local resident failed to bear all “benefits” of life under occupation and committed suicide using a grenade.

? On the 8th of March, Ukrainian border guards detained the so called head of the “Center for liberation of imprisoned “Officer Corpus””, the self-appointed “general” Volodymyr Ruban. The arrest happened at the Maiorsk checkpoint at the moment when Ruban was leaving the checkpoint for Ukraine’s mainland; the “liberator” carried a solid arsenal of weapons along with him. At present, the detained has been transferred to the SSU and kept at the Mariupol remand center. He has been informed of a suspicion under articles on assassination attempt, terrorist attack, destabilization of internal situation in Ukraine and other crimes aimed to undermine the situation in the country and creating the preconditions for further russian intervention. Hopefully, the “general’s” future will be determined by further investigation and court trial – at least, this was the course of events The Prosecutor General guaranteed. It worth mentioning that there was an interesting detail in this case: leaders of terroristic organizations and groups have already openly voiced their support of the famous “peacemaker” Ruban. 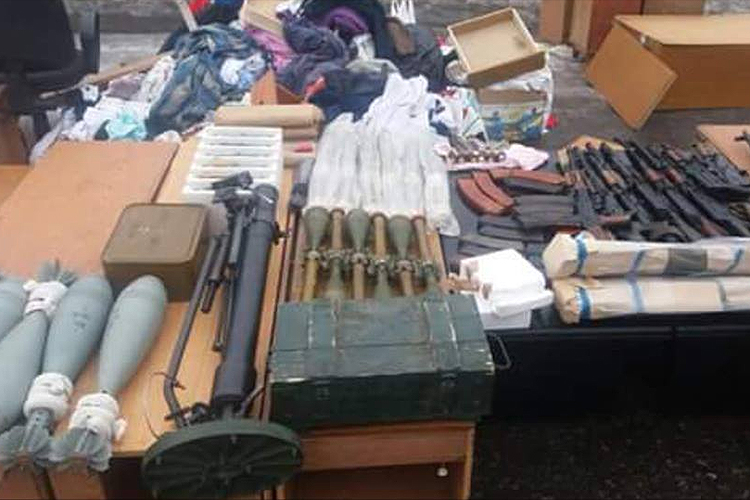 ? The US Department of State has officially addressed Russia’s Ministry of Defence with a demand to instruct their mercenaries not to prevent the performance of the OSCE SMM team in the temporarily occupied Donbas territories. The demand to hold the russian-lead terrorists followed the prolonged period of restriction on movement of the OSCE SMM patrols and their access to the withdrawn armaments storage sites, on the part of armed terrorists. Moreover, recently an armed terrorist resorted to open intimidation of a the SMM team – using his gun, he prevented their work threatening to shoot directly at the OSCE patrol officers.

? Despite threats and restrictions, the observers are carrying out their mission. Lately they recorded another 15 items of barrel gunnery belonging to the terrorists, near Buhaiivka, Luhansk region, as well as certain amount of newly dug trenches and terrorists’ positions on the temporarily occupied territory of Donetsk region.

? Another religious conflict is raging around the russian orthodox church in Ukraine. Bulgaria’s deputy PM has publicly called the russian patriarch Kirill “an KGB agent” and a “cigarette metropolitan”. This came as a response to Kirill’s complaint about “lack of praise” for the country he represents, on the part of Bulgarian president. Responding to this complaint, Bulgaria’s deputy PM called the russian patriarch “a second class KGB agent” who benefited from the privileges given to his church and made a fortune thanks to his illegal tobacco and wine business.

To assist the Ukrainian Army and support our military with necessary equipment you can press the button below: