ATO veteran is back on his feet after mine explosion

The 51st Mechanized Brigade’s fighter Yuriy who has been treated for the most complex leg injury, has completely recovered. Doctors carried up the final examination and confirmed full restoration of the tibia. “The bone has completely restored and regained due strength. The only thing the needs now is full workload on the leg necessary for its functionality restoration and adaptation,” – Volodymyr Oksymets, the surgeon at ilaya clinic, commented.

Yuriy himself boasts of his ability to walk not being supported by a cane for practically any distance. Sometimes, the ankle joint bothers the guy who experiences some pain following heavy load. Still the doctor assures that it will improve over some time as the joint wasn’t injured, just gone somewhat atrophied due to prolonged treatment. 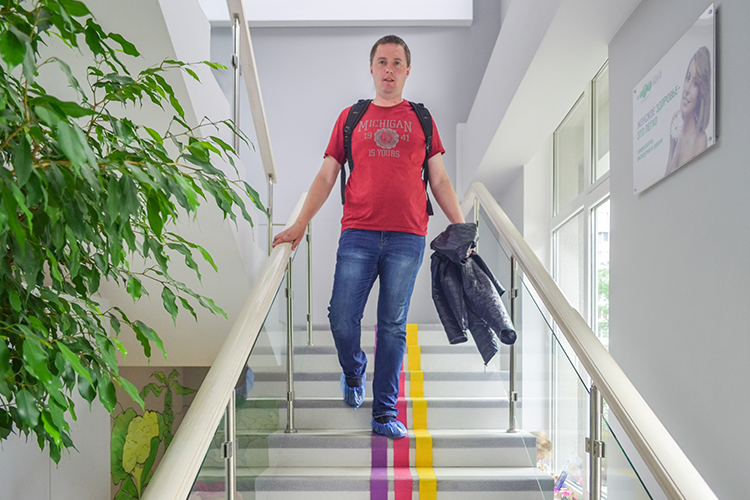 Yuriy keeps quite reserved when telling of his injury, still his story remains as detailed and vivid as if it happened yesterday. “This happened near Sloviansk. I was moving in the middle of the convoy. At that moment, an APC and Ural truck have passed the spot, and I decided to stick to narrower radius at the turn. Well, I knew the rule: you have to keep the same trail as the entire convoy does, and not to move aside from it. But I didn’t realize I drove a bit to the left, and that was it: suddenly I felt everything was moving up and I’m thrown out of the cabin through its door; the explosion hit my legs. I suffered quite a lot, and my comrade who was sitting next to me, got away with relatively slighter injuries. I immediately realized it was a roadside bomb. The worst thing was that it was controlled by a local. Later, he was arrested and sent to prison,” – the veteran tells.

Yuriy underwent treatment in a number of military hospitals, still in vain – the leg refused to fuse up, and a false joint formed. Thanks to volunteers Yuriy got into the Bioengineering Rehabilitation for Wounded project run by People’s Project volunteer center. For the moment, the veteran’s leg was completely unsupportive. Yuriy’s treatment started on the 13th of August last year. Doctors took out cell materials from the patient and installed the Ilizarov apparatus on his leg. For a few weeks, cell materials were processed and grown at the lab, after what these were inserted as 3D osteoprogenitor chips in the area of nonunion fracture. Later, a few months in a gypsum and extended physiotherapy followed, and the ordeal finished.

After the regular check-up the ATO veteran left for home where he has been in repairs since his discharge from the army. Moreover, the man owns a farm, so there’s lots of work which he is able to do just like he used to in his pre-war and pre-injury times.

We thank everyone who didn’t stay aside and assisted us in raising the necessary money. Any support matters. We are sure that having combined our efforts we can do a lot of good. As before, we rely upon your support. Without it, our wounded defenders have no chances to recover.