An ATO veteran and our ward within the Bioengineering Rehabilitation for Wounded project Bohdan Velychko not only has recovered following his severe injury but became a successful businessman. For almost a year, his coffee shop possessing the self-speaking name Coffee 93 Grains, has been the town of Brody’s (Lviv region) most prominent outlet that delivers the most scented drink. Over this period of time, the former military man has become a pro barista and learnt the slightest nuances of making the perfect coffee drink. “Well, I can call this my job, but in fact it’s my hobby and my inspiration. I like the coffee that I lack at home, so I prefer to come out and prepare the drink; also, I seize the opportunity to make a good coffee for my guests,” – Bohdan is joking.

Also, the former fighter told the story behind the current name of his business, the Coffee 93 Grains, and its meaning. “The title is rather symbolic. It has been invented by a comrade of mine who is now working in Kyiv and owns two coffee shops. We served in the 93rd Brigade, so coffee beans embody all of our troops sharing the same idea. I used to serve about two years, first as a volunteer with the Azov battalion, then I signed a contract with the 93rd Brigade. Later, I was fighting near the village of Pisky, in Donetsk airport vicinity. Before the army I used to be a businessman; once I worked as an editor at a newspaper: I was creating and publishing advertising materials. Still the year of 2014 seemed to be a crucial point, so I decided to join the army,” – the former military recollects.

Everything you want to know about Bohdan’s coffee shop: just watch the video.

In 2016, Bohdan struck a tripwire near Pisky. His left radius got severely injured. In conventional hospitals, they successfully healed the soft tissues, still the crashed bone remained broken. The complicated fracture and major tangential (in the lateral part of the bone) defect have been healed by means of application of cell technologies solely. 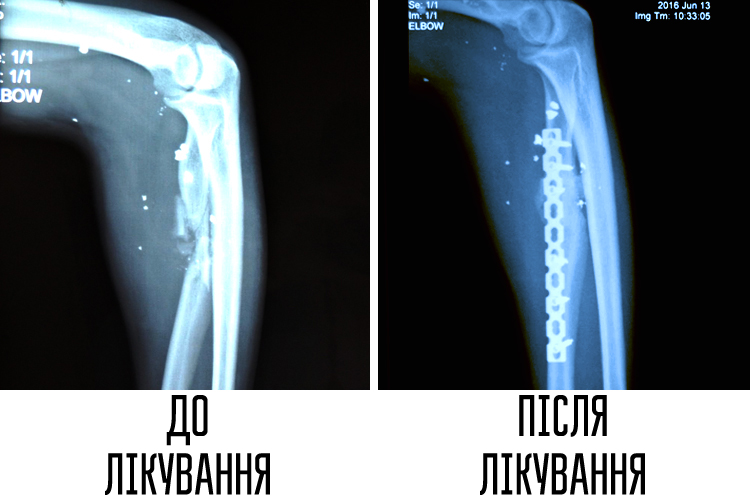 The full course of Bohdan’s treatment was paid at the expense of people’s donations: within the Biotech, the volunteers of People’s Project raised for Bohdans’ needs the amount of 235 thousand hryvnias. Immediately following the recuperation, the fighter immersed in active physical training, and running marathons; he even took part in the Invictus Games, the extremely demanding kind of exercise that involve war vets from around the globe. We are sincerely glad to admit that every penny of the money we raised, was directed to the upright purpose: it helped to get that energetic, vigorous and nice guy back to full life. Unless the project, he might have remained crippled until the end of his life.

We urge you to give the same chance to the rest of wounded fighters: the Bioengineering Rehabilitation for Wounded project has not been completed yet, and many other injured fighters need further treatment which cannot be guaranteed or at least provided by the state. So the only hope they can cherish is our shared assistance plus the project doctors’ skills. Dear friends, please don’t hesitate to participate in the Project: each small donation in it is of a great importance, and your participation is highly welcome!