NGU’s fighter Volodymyr got apparatus removed from his restored shinbone!

Dear friends, we haven’t shared any info about our Biotech guys for quite a long period of time, so accumulated quite a big portion of good news. Let us start with Volodymyr. Last week Volodymyr visited the medical center for another check-up. As soon as the doctors saw his shinbone’s latest x-ray, they immediately recommended him hospitalization. Actually, there was nothing wrong with his leg, – just the other way round! Volodymyr’s leg got strengthened enough, so it was from it decided to remove the apparatus of external fixation. This news made Volodymyr quite happy as he feels much more comfortable without the cumbersome metallic structure on his leg. 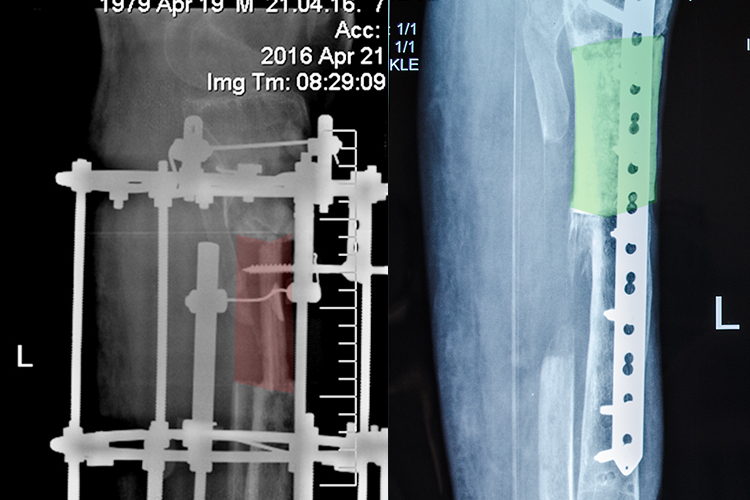 On the left, you can see Volodymyr’s bone defect in 2016, when he just joined the Project. The x-ray on the right shows the bone defect that has been replaced with the new tissue (marked area).

At the moment, Volodymyr returned in his home city, Lviv. It will take him some time to train his newly restored leg, and shortly he will be asked to have a few subsequent examinations. A metal plate will remain fixed on his bone for some time. To remove it or not, this question is to be discussed in the course of rehabilitation, depending on the outcome of increasing workload on the leg. If it blocks free movement of the muscles, the plate will be removed, and if no, it will stay attached to the bone so far. 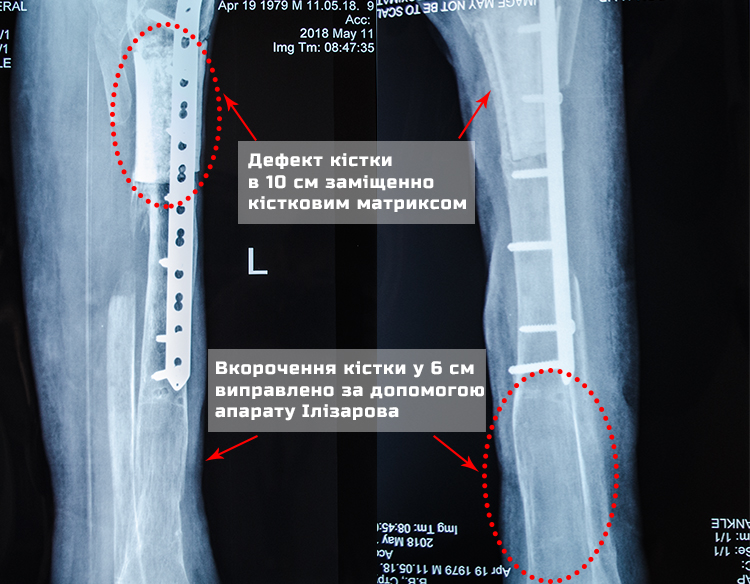 So let us wish Volodymyr speedy recovery! See you in summer, at the regular check-up!

Volodymyr is a fighter with the National Guard of Ukraine, wounded near the town of Popasna. On the 19th of June, 2015, while on a combat mission at a check-point, he got under “Grad” shelling carried out by the separatists from the towns of Stakhanov and Pervomaisk.

First, the man was treated using conventional methods, still due to major defect to his shinbone (total defect made 16cm) and numerous complications his leg remained non-supportive. Providing Volodymyr continued treatment in state hospitals, he would have lost 6cm in his leg’s length. Not to mention the fact that the splint bone, which had been used to replace the defect of tibia, would have always remained the leg’s weakest part: a repeated fracture happens there in 100% of cases.

In spring of 2016 coordinators of the Project found Volodymyr and offered him to participate in the initiative. In June he started to undergo treatment within the Project. The doctors took cell materials, re-installed the external fixation apparatus and got the recipient area prepared for further transplantation. 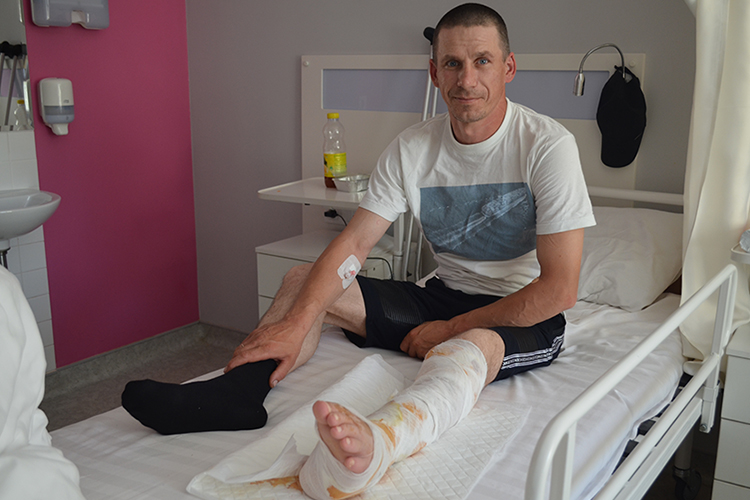 The major surgery took place in October of 2016, when medics of the project replaced 10cm of his shinbone using a bone bloc filled with autologous stem cells. And in a month and a half the x-rays showed that the fusion went well.

During the next stage of treatment that started in March of 2017, the hero underwent the osteotomy of the shinbone, after which the Ilizarov apparatus was installed on his leg – this construction was meant to stretch the bone up to the missing 6cm in length. Volodymyr was wearing the apparatus for about a year until the stretched bone strengthened.

We, the volunteers of People’s Project, have spent on the course of Volodymyr’s treatment 665 345 UAH total. All this money has been raised thanks to individual contributions and people’s donations, as the state refused to join in. That is why we repeatedly ask you for your support, as there are other participants in the Project who also need our assistance: their stories and profiles you can find if you follow the link. Dear friends, please do not ignore our request.

Now Mr. Volodymyr is the Project’s newest participant whose treatment is about to start. He is an officer who dedicated his whole life to the Army, and when the war broke out, he kept his oath and got into fighting the enemy, acting fearlessly and resolutely. Now as he got wounded, the only thing he can rely upon is our joint support.