Terrorists have crippled another our border guard again. Yesterday, on the 1st of October, about 5:00 PM the State Border Guard officer has sustained a massive burn of the retina whilst watching the border near the temporarily occupied Mariinka using his optical device. According to specialists, the loss of eyesight due to thermal injury of the retina makes about 80%, and the burn itself was caused by a powerful laser beam. This is another case when enemy burns out our militaries’ eyes: on the whole, terrorists have already crippled five servicemen of the State Border Guard alone.

Still there are more similarly injured fighters among our military. Ukrainian snipers are those who are regularly affected by the laser weapons used by Russians. Over the recent period, their latest counter-sniper complexes have been emerging on the contact line more and more often: there are a few injured among our friends, the shooters. 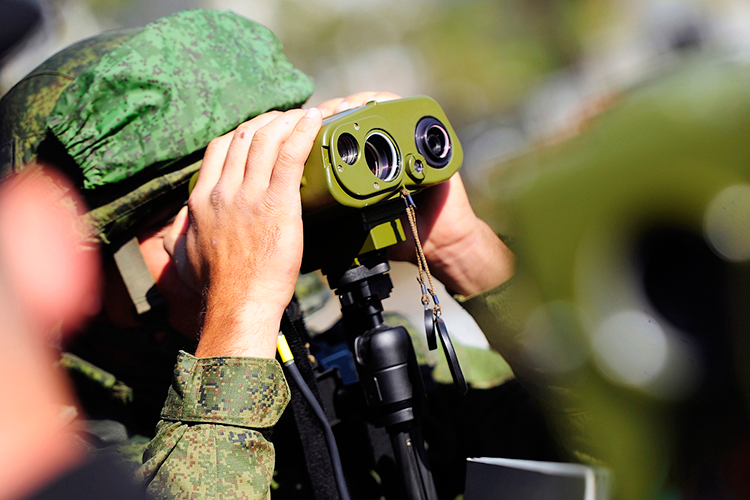 A Russian military armed with a counter-sniper optical complex

The working principle of such complex is simple: the device which looks like binoculars, scans the environment using infrared rays. Logically, lenses of any optical device, either a spotting scope, binoculars or even sights, reflect these rays like a mirror. It is the reflected radiance that is being detected by the sensors of a counter sniper complex. The next step is rather straightforward: either the enemy sniper aims and shoots at our fighter himself, or he transfers his geolocation data to their artillery.

Lately, the latest Russian developments have been spotted along the contact line: the counter-sniper complex not only detects the optics used by Ukrainian snipers, but also “shoots back” at it with the rays of a separate powerful laser. These impulses damage the optics itself, but the main point is after going through the optics, it also reaches the shooter’s eye and burns it. This is the way the Russians cripple our military men engaged in counter sniper activities in the forefront who tries to defend both our military staff and local residents against the Russian snipers.

Such devices are not new for the Russian army. Here’s the “father” of Russian counter sniper systems, Nikolai Slipchenko, who has been developing and patenting this kind of gear for many years. Usually, the Russian propaganda as well as Slipchenko himself describe them as the means of damaging enemy optics, omitting the principal point, – the fact that main damage is caused to human eye. And the motives for that are quite understandable: the UN Convention on Certain Conventional Weapons regarding the use of certain weapons which inflict excessive injury or suffering on combatants or the Vienna Convention, and in particular its Protocol IV, restricts blinding laser weapons. But when Russian barbarians took account of any convention or humanism ever?

There are certain ways of countering such complexes. Experienced snipers recommend lessening and reducing the angle of reflection. This can be achieved through a number of simple steps: a shooter can mount a blend lens with a slot onto his scope; perhaps the customary or handmade cellular blend lens will work even better. The blend is the tube of the same diameter as the scope, filled with tubes of lesser diameter which bend the angle of reflection. Apart from this, snipers advise to arrange false positions: this is the purpose for which we asked you to support us with the outdated or broken optical gear that you may own.

A good scope equipped with an electronic signal filtration system

Still, all these measures and devices hinder the work of an enemy sniper and protect against laser attacks not completely. Having discussed the issue with our friends-snipers, we decided to try another way, for the case when an opponent armed with laser has already detected our sniper. To protect the eyes of our shooters, we are going to buy a few scopes able of digital signal filtration. Apart from the possibility to work in both day and night time it provides (due to the night vision feature), the scope does not have the transversal, or through, optical channel. That is, if a laser ray hits the lens of the device, it will harm the optics solely, leaving the eyesight of the shooter intact. Thanks to the sponsorship of an individual contributor, one such scope has been already purchased and is to be sent to our snipers in the forefront for field testing soon. But to satisfy all their needs, we have been raising funds to buy four such devices more. That is why we apply for your help once again: each donation within the I Am Sniper project gives our guys the possibility to keep their eyesight protected and to safely confront the Russian killers, even if those are armed with the latest weaponry. Dear friends, join in!