Eight Ukrainian military have been killed in April due to combat actions in Eastern Ukraine or died in hospitals following the injuries they had previously got. The youngest one was 20, the oldest – 50 years old.

Six deceased were AFU’s military personnel and one fighter served in the National Guard. Also, one soldier died following the injuries he had got last December. Four fighters were killed due to enemy fire (two of them are the victims of enemy snipers), one shot in a clash with the enemy saboteur group; another soldier died due to the mine explosion that hit his vehicle. The National Guard military died in an accident caused by blast that took place during the cannon ammo load.

Let us remember all the heroes fallen over April. They sacrificed their lives for us. 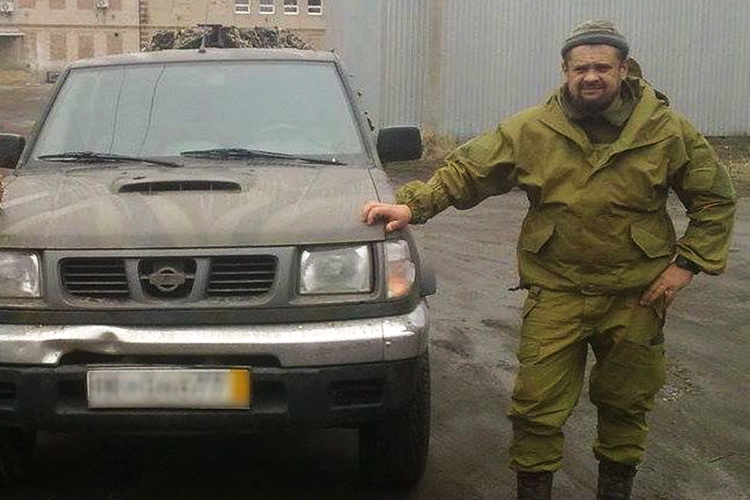 On that day, the 8th of April, the orthodox church believers were celebrating Easter. Still there are no holidays or days off in the war. According to the official report, the group of lieutenant Volodymyr Maiboroda from the 24th mechanized brigade was in a secret shelter near the village of Zhovanka (which is divided by the contact line), when they noticed the opponent saboteur group. Callsign Mai, the deputy commander of the recon unit, decided to attack the enemy. Two fighters moved from the one side, and Mai advanced from another, when he got into a mine field. The separs (separatists) began fleeing. The Ukrainian military killed two militants using automatic gunfire and picked their documents which were later passed to our command. Still they failed to find and bring their commander back until dark. They came after him twice, but alas… Only on the 13th of April the so called DPR informed that they found the body of Volodymyr who crawled toward the Ukrainian positions, being heavily wounded, and died of his injuries in the field. The body was evacuated to the morgue located in the non-controlled territory. On the 15th of April it was handed over to the Ukrainian part at the Mariinka checkpoint.

Volodymyr was 50 years old. He was born on the 9th of July, 1967, in the town of Melitopol, Zaporizhzhia region. He was raised in the village of Peremozhne, Yakymivskyi district, where Volodymyr finished school. Later, he served his regular military service. Moved to Melitopol after getting married. In spring of 2014 the man participated in the Melitopol local self-defense’s activities – he used to man the checkpoints along with his comrades.

Since the summer of 2015 Mai served in the Donbas National Guard battalion; fought in Shyrokyne. In October 2016 together with his comrades Maiboroda moved to the 16th Motorized Infantry battalion of the 58th Mechanized Brigade and fought in Avdiivka. Since May, 2017 Mai served in the 3rd Battalion of the 72nd Brigade, with which he fought in Promka, an industrial zone in Avdiivka outskirts, and on Butivka coalmine. When the 72nd Brigade was rotated, Mai moved to the 24th King Danylo Mechanized Brigade to stay at the forefront.

The fighter has been buried in his native village of Peremozhne. He is survived by his grown-up daughter and wife. 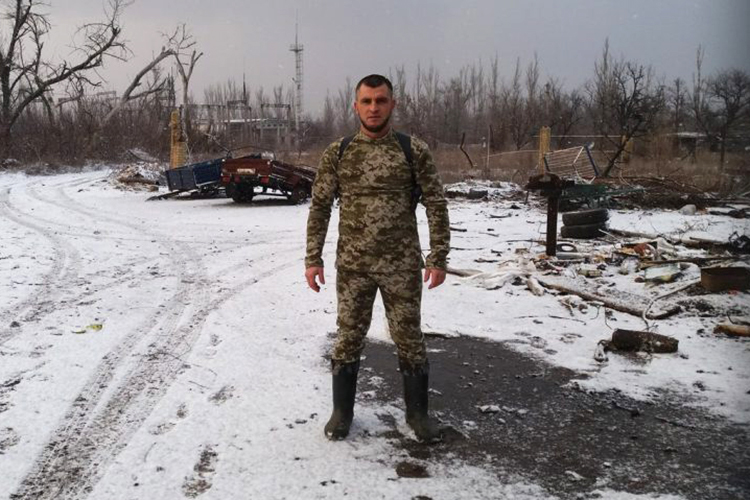 On the 12th of April near the village of Pisky located in Donetsk outskirts, Denys Nachosnyi, a 31-years-old serviceman of the 34th Motorized Infantry battalion, a native of the town of Henichesk, Kherson region, was killed by an enemy sniper’s bullet.

Denys was born on the 2nd of September in 1986. He was mobilized to the army in February of 2015. On demobilization, he stayed behind service about a half of year, and in September, 2016 the guy signed an enlistment contract and went to the 34th motorized Infantry battalion of the AFU’s 57th Brigade. Rank – sergeant, position – deputy platoon commander (acted as platoon commander), combat vehicle commander.

On the 8th of April Denys just returned from the leave during which he had got married in his native town of Henichesk. In four days after his comeback to Pisky the man was killed.

Nachosnyi was buried on 15th of April in the village of Chervone near Henichesk. He is survived by his parents, wife and daughter from his first marriage. 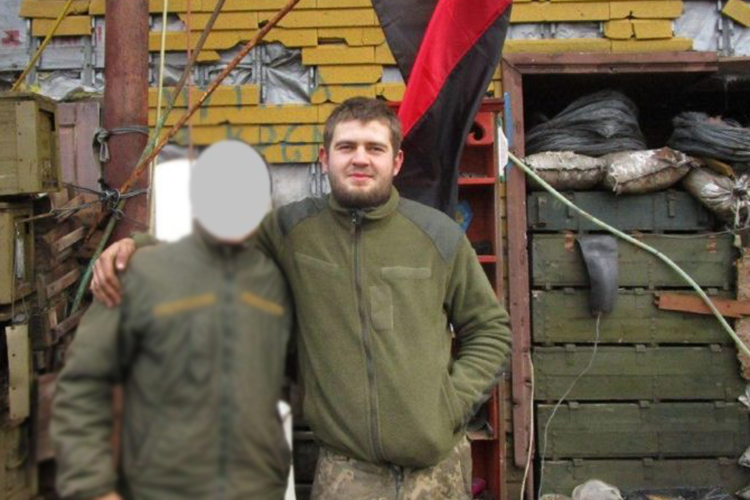 He has just turned 21 years old. Maksym Mykolayovych Cherkun was born on the 9th of January, 1997, in the city of Kryvyi Rih, Dnipropetrovsk region. He lived in the village of Kryvbas and worked at the local Agricultural company titled Scorpio, in its security service. Used to be a member of the scout group at the Patriot military and patriotic club in Kryvyi Rih. He aspired to enter an aviation college. Studied at automobile transport college where he gained the profession of a mechanic; later he continued education at higher professional college where got the same specialty.

The guy got to the army in 2015 when he was 18 years old – he joined the Pravyi Sector Ukrainian Volunteer Corpse. IN March of 2016 he signed a contract with the AFU. Served in the 34th motorized infantry battalion of the 57th Brigade where he was a sergeant and a commander of the counter-tank machine gun division with the 2nd motorized infantry company. Maksym headed the defense of a checkpoint near Pisky in Donetsk vicinity. He was killed on the 26th of April in mortar shelling.

Maksym is survived by his parents. Buried on the 19th of April in the Honor Alley of the central cemetery in Kryvyi Rih. 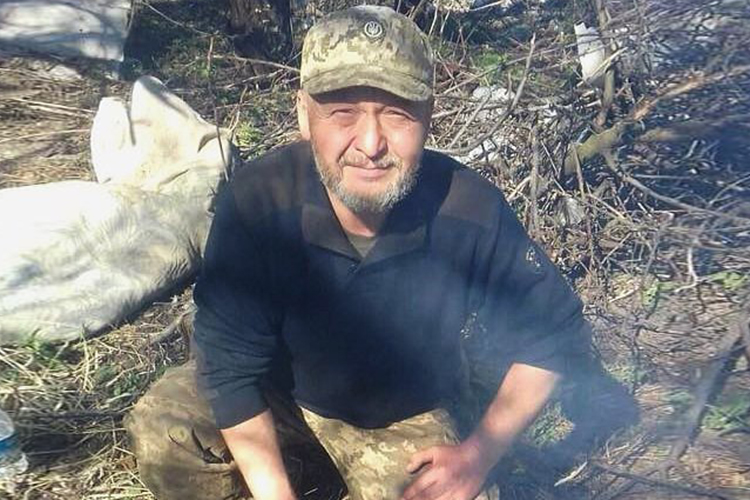 Senior sergeant, senior aimer with the rocket platoon of the 2nd mechanized battalion of the King Danylo 24th Mechanized Brigade, Mykhailo Shozda was killed on the third day following his 50th anniversary which he celebrated at the forefront.

He was born on the 14th of April, 1968, in Lviv where lived all his life. He graduated from Lviv Polytechnics university. He served his regular service in Chekhoslovakia, in the artillery troops. In 1989 he got married and later became a father for his son and daughter. Worked at the construction materials shop and headed the Visco company.

Mykhailo Ivanovych signed a contract with the AFU’s 24th Brigade in January of 2017. As his comrades from the 24th Brigade, Mr. Mykhailo often volunteered to serve his guard duty instead of younger fighters. He used to comment this like that: “Seems it is rather unquiet outside: let the guy stay in the dugout, and I would better do the guard over him. I‘ve already lived enough, and he’s too young and should stay alive!”. According to the improved information, Mykhailo Shozda was killed at midday on the 17th of April near the village of Zaitseve, Donetsk region, due to a penetrating gunshot wound to his heck. It was an enemy sniper’s shot…

Mr. Mykhailo was buried on the 20th of April in Lychakivske cemetery in the Alley of Heroes. He is survived by his brother, mother, sister, wife, son and daughter. 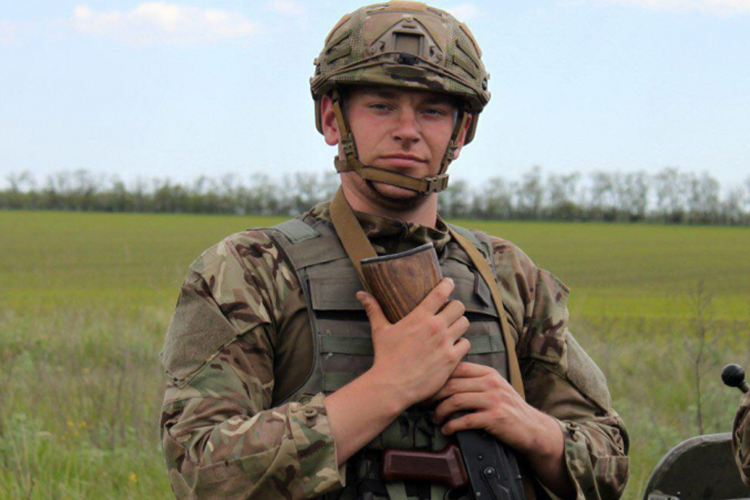 Yevhen Victorovych Khomenko, a 20-years-old fighter of the Azov Battalion of the National Guard of Ukraine died in the morning of April, 20th in Mechnykov Dnipro regional hospital. He was urgently moved there a day before by air ambulance via mobile hospital due to a severe shrapnel injury to his head that he had got on the 18th of April as the result of a shell explosion near the village of Pavlopil in Azov region. Doctors declared him brain-dead, still did everything to rescue the guy’s life. Khomenko was in a third-degree coma. The surgery lasted for 20 hours, to no avail…

Yevhen was a native of Vilnohirsk, Dnipropetrovsk region. He was born on the 25th of May, 1997. After completing 9 years in school he entered a metallurgical college and later graduated from it. Yevhen was a true patriot. He was going in for boxing. In 2014 the Khomenkos hosted a family of displaced people from Toretsk (then Dzerzhynsk) – their stories about the war fuelled the guy’s decision to join the army and go to the forefront.

He joined the Azov Battalion whan he was just 19 years old, in November of 2016. Yevhen served as an aimer in the howitzer artillery division. He adjusted howitzer fire – was engaged in things that require resolute mind, excellent stamina and sober responsibility.  His comrades remember him as a skilled fighter who was always cheerful and never refused to prove supportive.

At the Azov regiment, they informed that while loading hovitzer at combat mission, a shell went off, and Podgon had been severely injured in the accident. The National Guard command has not issued any explanations concerning the serviceman Khomenko’s circumstances of death yet.

The fighter was buried with all due military honors in his native town of Vilnohirsk on the 22nd of April. He is survived by his parents and younger brother. 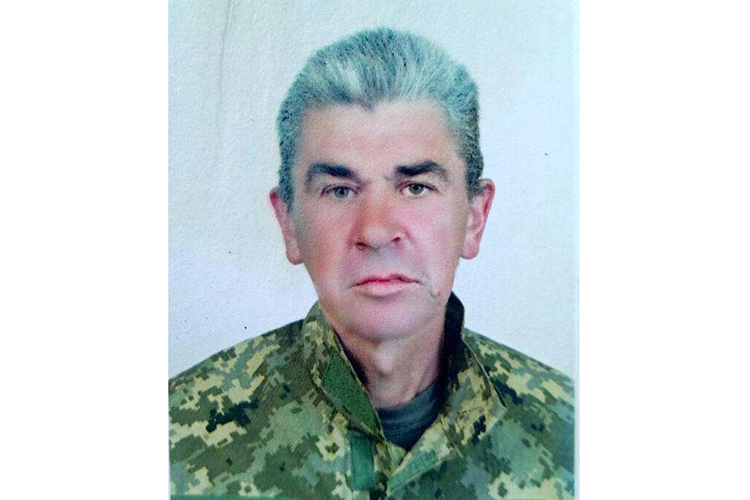 On the 20th of April, Hennadiy Shyrokyi, driver of the 3rd mechanized battalion with the 25 Air Assault Brigade of the AFU’s Air Assault Troops, died after a four-months coma in Kyiv military hospital. The 48-years-old senior soldier had got heavily injured on the 24th of December, 2017, during an enemy shelling of the 25th Air Assault Brigade’s positions in the Avdiivka industrial zone.

“He was an exceptionally joyful and nice person, a true patriot… A paratrooper! While on a combat mission to one of the most unsafe positions of the Avdiivka’s Promka (industrial zone), he got severely wounded in a continuous enemy shelling, and, unfortunately, the injuries he suffered did not leave him any chances for survival…”, – his comrades at the Brigade told.

Hennadiy Vyacheslavovych was born on the 15th of August, 1969, in the village of Moskovka, Kupiansk district, Kharkiv region. He was mobilized to the army in June of 2015. Served with the 25th Kyiv Rus motorized infantry battalion as a driver of the supply unit. At the beginning of 2016 he had got wounded in the Svitlodarsk bulge.

On demobilization, he returned home, but at the beginning of past winter he signed a contract with the AFU.

Hennadiy Shyrokyi was buried in Moskovka on the 24th of April. His fellow villagers escorted their friend and neighbor in his final journey, kneeling. 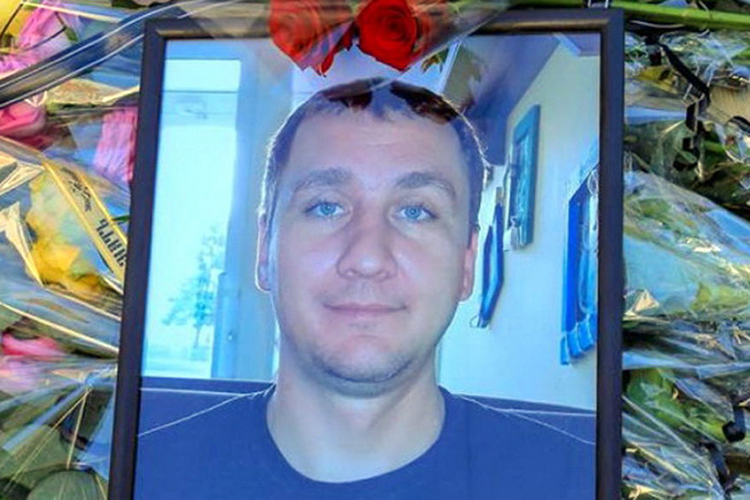 Oleksandr Matus was born on the 18th of September, 1981, in the town of Lysychansk, Luhansk region. He graduated from Luhanks State University of Internal Affairs. He was honored Master of Sports in kickboxing and won numerous Ukraine’s championships; many times got awarded in top boxing contests including national chanmpionships.

In the summer of 2017 he signed a military contract with the Armed Forces of Ukraine; served with the 53rd Mechanized Brigade as a soldier and scout of a recon unit. Lysychansk and Severodonetsk area was the Brigade’s place of permanent stationing.

He was killed on the 20th of April about 2:30 AM near the village of Krymske, Novoaidarsk district in his home Luhansk region. That night an enemy APC was deployed to shell the AFU’s positions there.

The fighter was buried in his native town of Lysychansk on the 23rd of April. He is survived by his wife and two daughters. 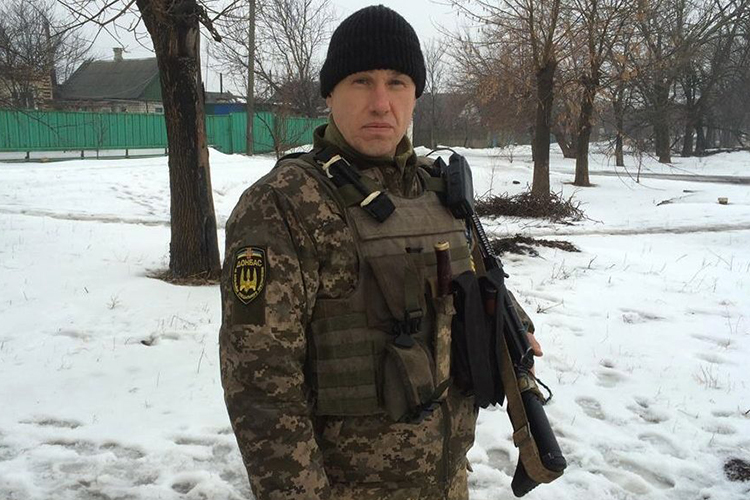 40-years-old Serhiy Perepelytsia was killed on the 21st of April when their military vehicle hit the mine near the Svitlodarsk bulge.

Serhiy Leonidovych was born on the 2nd of July, 1977, in the village of Zvanivka, Bakhmut district, Donetsk region. Graduated from Bakhmut industrial college. Worked as a blacksmith at Donetsk railways. In July of 2016 he was elected Deputy of Zvanivka local assembly.

At the end of 2016 he signed a contract for military service with the Armed Forces of Ukraine. Since March of 2017 served as the unit’s senior sergeant with the Donbas–Ukraine 46th Special Forces Battalion of the AFU constituting a part of the 54th Bakhmut Brigade. For the last several months he fought near the villages of Hladosove and Travneve in the vicinity of Horlivka recaptured by the Ukrainiaan military in November of 2017. He never abandoned his favorite occupation and a hobbyhorse, the blacksmith thing, even while serving with the 46th Special Forces Battalion.

Kuznets was buried on the 23rd of April in his native village of Zvanivka. Local authorities officiclly announced three days of mourning after him. He is survived by two children, a grown-up daughter and son.

Eternal glory to the fallen heroes who sacrificed their life for Ukraine!