Sergiy, a soldier in the 93rd Mechanized Brigade, was wounded near Horlivka. He was enrolled for treatment in the “Bioengeneering rehabilitation for wounded” project in October with a fracture of the humerus and 5 cm fracture of the radius – both caused by gunshot.
For treatment of Sergiy’s humerus, osteosynthesis (insertion of metal plates) was sufficient; the radius injury was more complex. When bone loss is that great, natural bone fusion is impossible and there is a risk of permanent disability due to loss of arm function. According to doctors, treatment of such injuries with traditional methods can take nine months or more and there is a high risk of a poor outcome. The alternative is to restore the bone using stem cell technology.
Sergiy’s treatment as part of the social project “Bioengeneering rehabilitation for wounded ” followed this timeline:
• 11.10.2014 the first stage of treatment – taking cellular material and pinning of the right humerus is completed;
• 13.11.2014 the second, main stage of treatment – removal of nonviable radius bone fragments and their replacement by means of cell-tissue osteoprogenitor material in the form of chips, fixed with bone fragments using LSP plates of Medimetal (Hungary) production;
• 14.01.2015 while recuperating at home the first X-rays slides are taken, which show the formation of new radius bone and active consolidation of the humerus bone fragments tissue at the site where cellular material was implanted;
• 23.02.2015 the second forearm X-ray slide is taken and shows complete recovery of bone tissue at the site of cellular material insertion.

Currently Sergiy is recuperating at home in his native Dnipropetrovsk, doctors from ilaya Medical Center monitor the process of bone regeneration via regular x-rays. The cost of his treatment totaled 147,024 UAH (which at the start of treatment was equal to US$11,348) was provided by the People’s Project – Ukrainian volunteers’ Center. 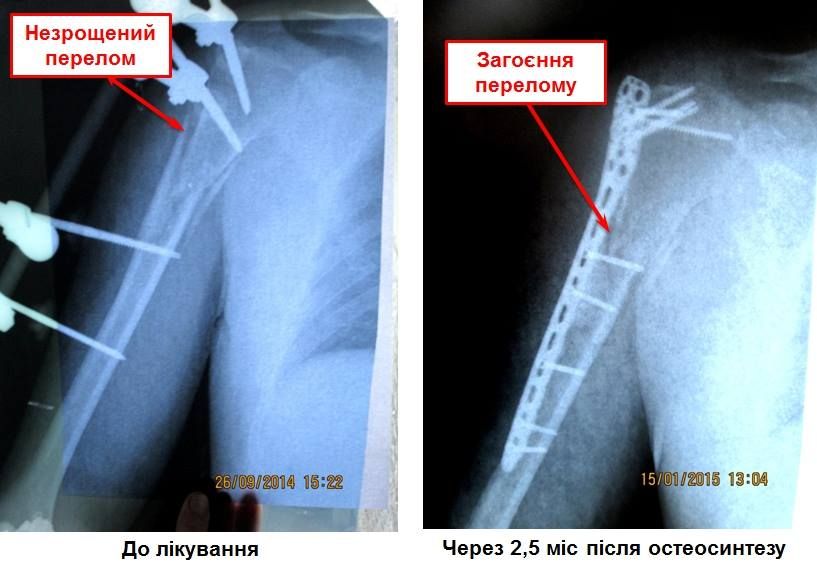 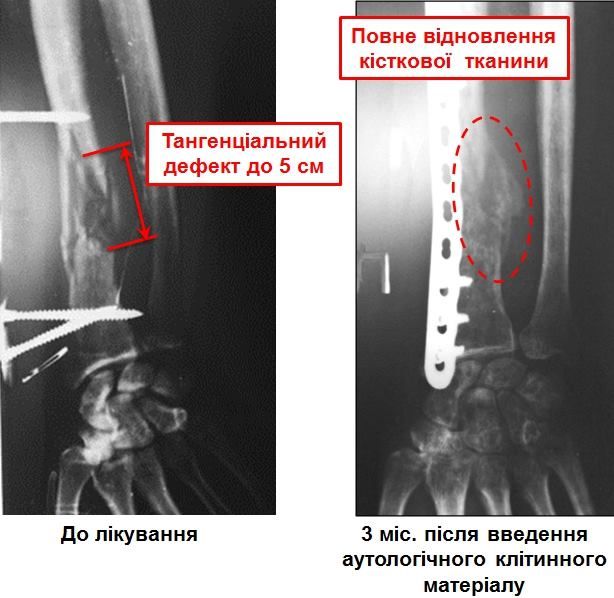