Home/I Am Sniper/Report/Russian snipers have become more active. We…

Russian snipers have become more active. We must help to calm them down

In Donbas, the trench war against the Russian military units and militants armed by Russia, continues. Reports on the Ukrainian soldiers and volunteers killed in the enemy snipers’ fire, come in more and more often.

Good friends of ours, the InformNapalm international volunteer initiative, carries on its activities as regards open source intelligence and collecting data about career russian officers already sent and being sent to Donbas. Information related to snipers is the hardest to obtain in social networks, still intelligence volunteers manage to find necessary data as well. Let us listen to their stories.

…On the 27th of March a 19-years-old fighter of the Ukraine’s Volunteer Corps of the “Right Sector” Andriy Kryvych, callsign Dilly, was shot dead by an enemy sniper. This was another great loss for all the Ukrainians. Accordingly, intensification of the positional war in Donbas where snipers play one of the deadliest roles, is worth drawing more attention to it.

The aggressor’s sniping pairs are often made up of Russian career officers and mercenaries trained in the Russian military camps. Still, one should distinguish “snipers” playing important role as a part of propaganda, from the snipers engaged in completion of real combat tasks. Both these categories are dangerous and play important role in a proxy war.

There are a few famous mercenaries who play the role of snipers in russian media. For example, a Serbian recruiter named Dejan Berić (callsign Deckie). He is always in the spotlight of Moscow-made propagandist stories; his task is to deflect attention from the deployment of career Russian officers in Donbas. Four independent competent sources located in Serbia confirmed that Dejan Berić is just a recruiter and propagandist whose role is to appear in propagandist TV news stories while real combat missions are completed by other mercenaries. This personage’s task is to provide misinformation and distraction of attention. This is a popular media figure, similar to “Givi” and “Motorola”, the puppet militants who had been eliminated when they believed in their mission as authoritative leaders but became redundant for Moscow. The Serbian “sniper’s” specious activeness in media makes a good example of military tricks as regards combination of propaganda and misinformation. 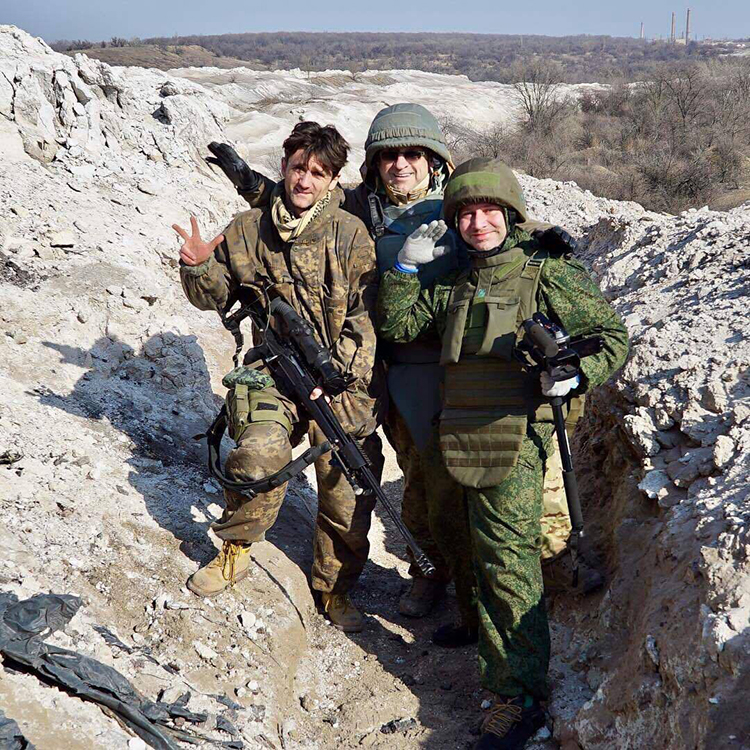 Against this background, it is rather difficult to spot real military snipers in social networks; still even these sometimes make mistakes and appear in the photos. 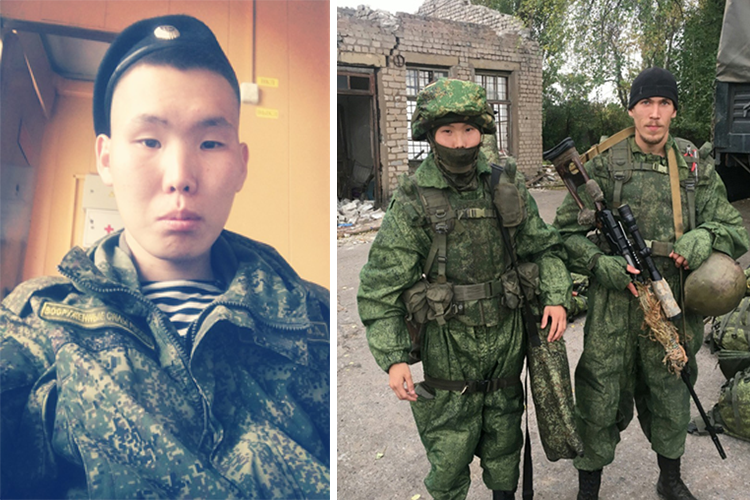 Still the geography of the russian military snipers’ engagement into the war in Donbas, has been expanding. Since October, 2017 we witnessed the arrival of another sniper group from Russia. Petrov Yuriy Dmitrievich was a member of this group. His place of residence: the city of Yakutsk, Russian Federation; birthday date: 19th of April (year unidentified); he served a contract military service in the Russian Armed Forces as a sniper.

The analysis of his profile in a social network testifies that since 2013 he has been serving on the contract in the 40th Naval Infantry brigade of the RAF (m/u 10103), and most likely remains the soldier of the same unit until present. In his social network profile, he admits he is serving a contract military service. 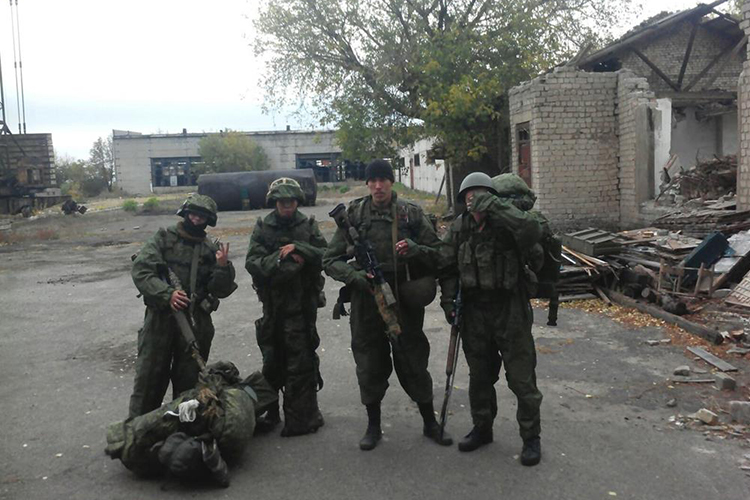 In October 2017 he was noticed in the photos standing next to another mercenary sniper, an RF citizen from Saint Petersburg, an owner of a social network profile under the name of Sergey Zhuravliov (probably an invented name). They jointly posed for a photo at the base belonging to the 7th Mobile Brigade of the 2nd “LPR” Army Corpse. Yuriy Petrov can also be spotted in a few other group pictures taken by soldiers of the same sniper unit. There are photos depicting arrival of their sniper unit in Donbas, in his social network profile. 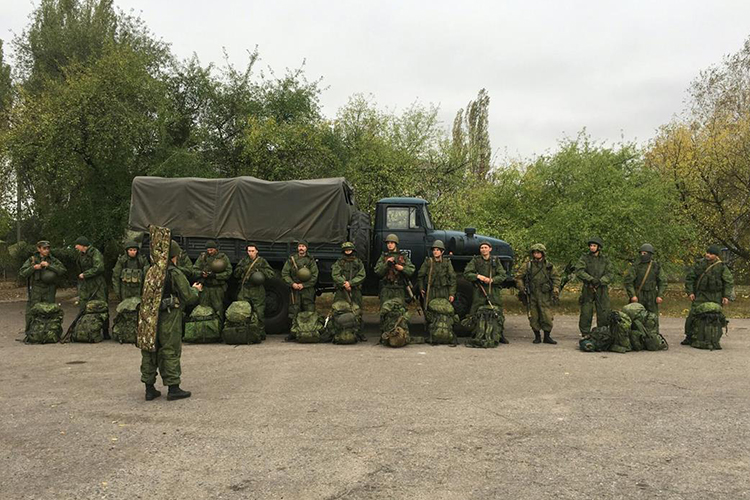 This was hardly the only personage, though quite an indicative one, spotted by the intelligence officers. For the fourth consecutive year Russian propaganda has been trying to present the war in Donbas as Ukraine’s inner conflict, still despite enhanced monitoring of the information outflows in the RAF, the evidence of Russian aggression keeps leaking into social networks. InformNapalm volunteer initiative has completed over 1800 investigations in which fixed the participation of more than 1300 Russian career officers belonging to 83 units scattered all over Russia, in the war in Donbas. In April of 2018 we are going to present an interactive database containing systematized information evidential of Russian aggression that has been amassed over the past four years.

May we remind you once again that only another sniper makes the most effective counter-sniper means. Within the I Am Sniper project we are constantly equipping our Ukrainian shooters with the latest gear, for them to be able to scout and defuse the enemy snipers before those cause any harm. 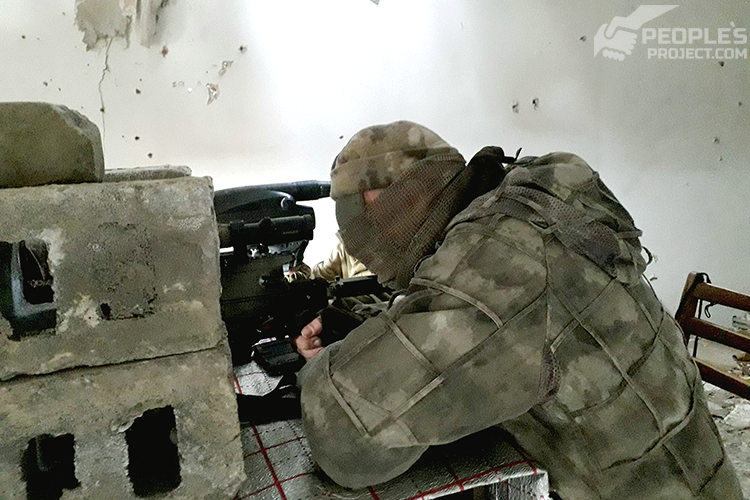 And here is a Ukrainian sniper at work. Despite it cannot be seen because of his cover-up, he is a good kind-hearted guy, take our word for that. Besides, he is an excellent sniper as well!

At the moment, the snipers of a special forces unit ask us to help them obtain a thermal imaging scope. These brave guys have repeatedly rewarded both you and us with their eloquent reports on effective cleanup of the Ukrainian Donbas’s land. So we have to support them one more time. Dear friends, please keep in mind that the enemy will not shoot themselves on their own! To prove supportive in a flash you can press that big green button below.