Officer thanks to whom Bakhmut remains Ukrainian town, needs our help

The Bioengineering Rehabilitation for Wounded project took on the case of Mr. Volodymyr on the priority base. Mr. Volodymyr is literally this war’s true legend! The man who miraculously escaped death, has been fighting against the consequences of the severest injury he had got in a battle. The situation is rather difficult and requires fast decisive action. The leg broken by the gunshot wound remains kept together only thanks to a metal pin, and the destruction continues. We must help!

Mr. Volodymyr is a career military, a colonel of the Armed Forces of Ukraine, an ATO participant. At the beginning of the war Volodymyr Ivanovych used to head the reserve tank brigade located in the town of Bakhmut (former Artemivsk), Donetsk region. At that time the pro-russian mercenaries already controlled the town, still our military managed to hold defense of their base. Naturally, the occupiers repeatedly tried to seize the foothold as a few hundred tanks made quite a morsel for the separatists. 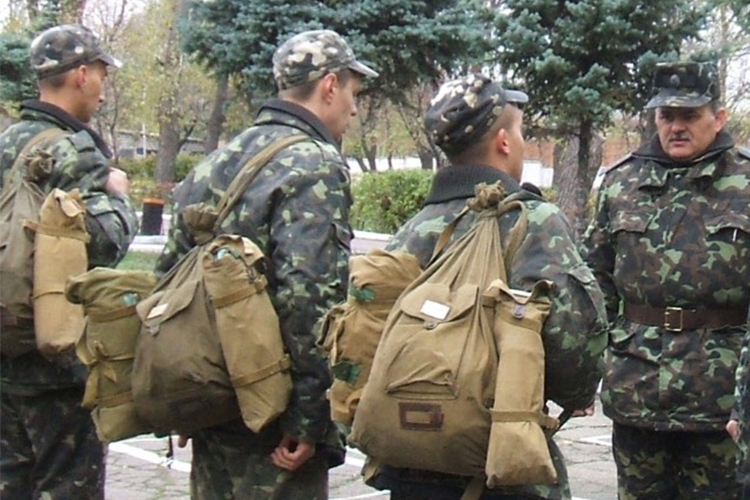 On the 24th of April the military unit underwent probably the most vicious attack: about a hundred mercenaries and disguised Russians armed with grenade launchers and automatic rifles tried to capture the military equipment stored at the stronghold. Actually, it was only the commander’s resolute order to fire back in response that helped to stop the attack.

One year later Volodymyr Ivanovych’s deputy commander told that our military units did not see the other way out than to hold defense of their foothold. The opponent then gave an ultimatum that sounded a bit strange: how can a military let down arms and withdraw from his place of service? “It looks like the situation when bandits broke into your house and gave you time to leave it,” – Mykhaylo Dyachenko, the outraged deputy commander of the unit, recollects. He tells that their military unit used to remain the only spot throughout the entire Artemivsk where the Ukrainian flag was still flying over. 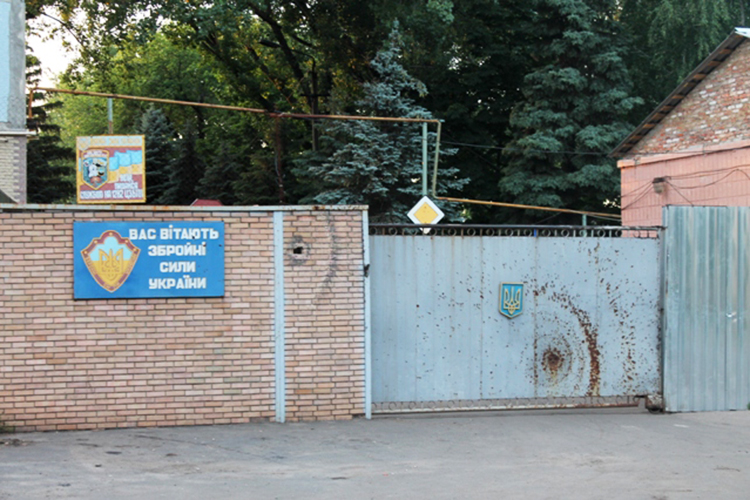 Logically, the officer like Mr. Volodymyr made quite a pain in the neck for the terrorists. They had been scheming his murder and capture of the base, for a long period of time. Partially they succeed in the June of 2014, when the commander’s vehicle got ambushed. The terrorists shelled and destroyed the vehicle, and Volodymyr Ivanovych got severely wounded in that battle. Despite the heavy injury, he fired back to the last bullet, until the backup arrived. As the result of the battle, three terrorists gone silent forever, and one was captured. 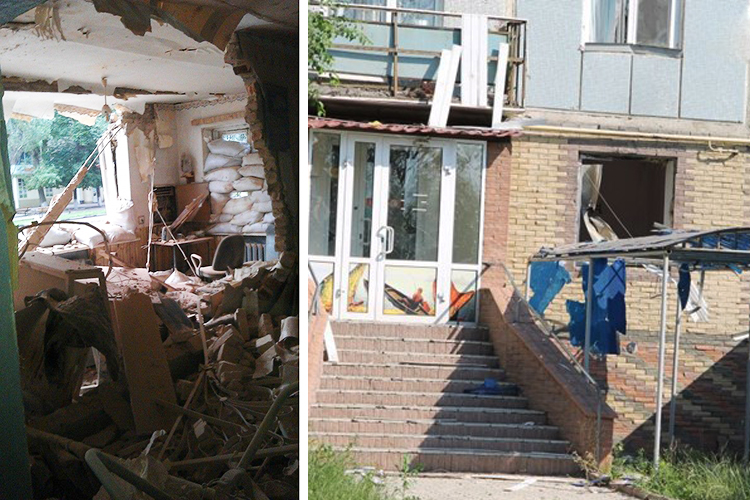 The military base after the mortar shelling

The wounded commander was provided first aid by the military unit’s medical staff, and when in some time the fighters broke through, they got their commander evacuated to Kharkiv military hospital. Later, Volodymyr Ivanovych was transferred to military hospital in Kyiv.

Mr. Volodymyr’s daughter still recollects the events that took place about four years ago, with horror: “It was so scary. When in Kharkiv hospital, my dad was permanently guarded by armed military. As soon as we learnt about his injury, we arrived in the hospital, still they did not let us in, for his own security. So we got the chance to meet our father for the first time only in Kyiv. There was an armed convoy in front of the intensive care unit, so we had to show our passports to prove we are the family and get in!”. 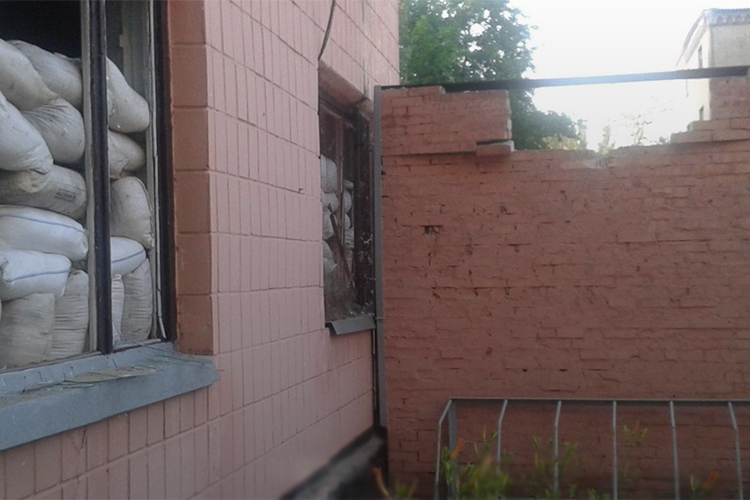 The military base during the blockade carried out by russian mercenaries. Back gate

When in Kyiv, medics stabilized Volodymyr Ivanovych’s condition and tried to join the broken bone using traditional ways: by means of the external fixation apparatus, and later with an intramedullary nailing, that is a huge screw placed inside the bone. Later, there emerged serious complications which resulted in seven surgeries that Mr. Volodymyr had to undergo. Unfortunately, despite all the efforts the leg failed to fuse up; moreover, it shortened by 2cm, and a false joint got formed in the injured area. 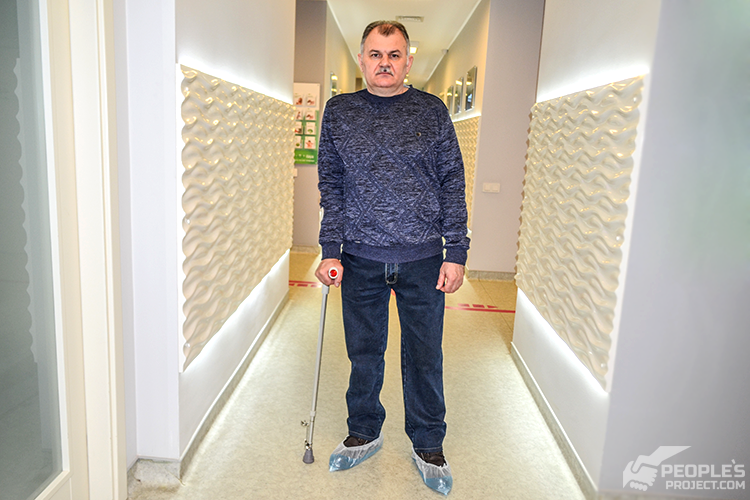 The methods of restoration offered by conventional hospitals’ medics, are not enough for Vjlodymyr Ivanovych. The man is not going to remain disabled for the rest of his life. The treatment method implying total reassembling of the leg and promising quite vague chances for further successful fusion, is similarly not an option for obvious reasons. That is why the Bioengineering Rehabilitation for Wounded project where application of cell technologies allows fast and uncomplicated fusion and restoration of the leg’s natural length, makes the best way out for the brave officer. 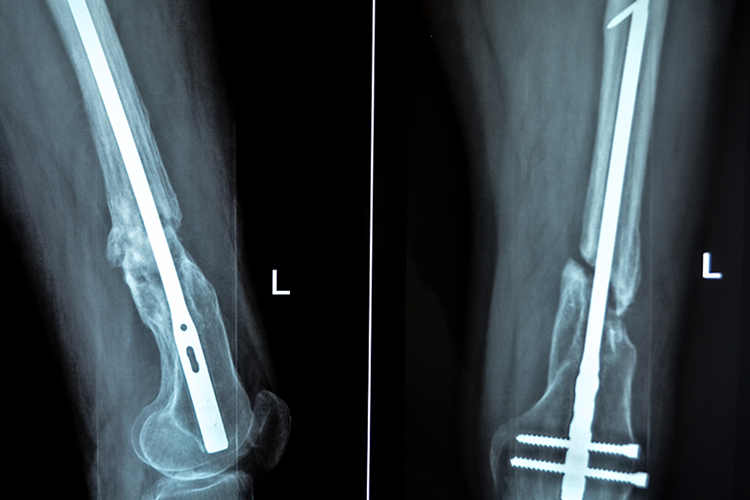 For his genuine bravery and true heroism demonstrated during those hard months, for his resolute resistance Volodymyr Ivanovych was awarded the third class Bohdan Khmelnystkyi order. Now Mr. Volodymyr lives quiet family life: the wound forced him to step out and reconcile with his temporary status of a retired military. Still this does not mean that the man lost his love of life and is ready to tolerate the limitations the injury puts on him.

Dear friends, now to the practical side of this case. Thanks to your warm support as well as generous contributions of a few individual sponsors who care about Mr. Volodymyr’s well-being, we succeeded to accumulate and pay 191 thousand hryvnias just in three days! This amount makes almost two thirds of total cost of Volodymyr Ivanovych’s treatment! We are urging you to join in and participate in assistance to real Ukrainian hero, the brave officer who has always been faithfully keeping his oath standing ibn defense of his homeland. You can easily take part in this good deed within the Bioengineering Rehabilitation for Wounded project or help our wounded military men by clicking the big green button below.