Dear friends, we’ve got some news on Volodymyr. Lately, this nice man has undergone the main surgery within the additional treatment course, so we are going to tell you about this in detail. Because even by the Biotech’s standards, Volodymyr’s case makes a single little miracle. 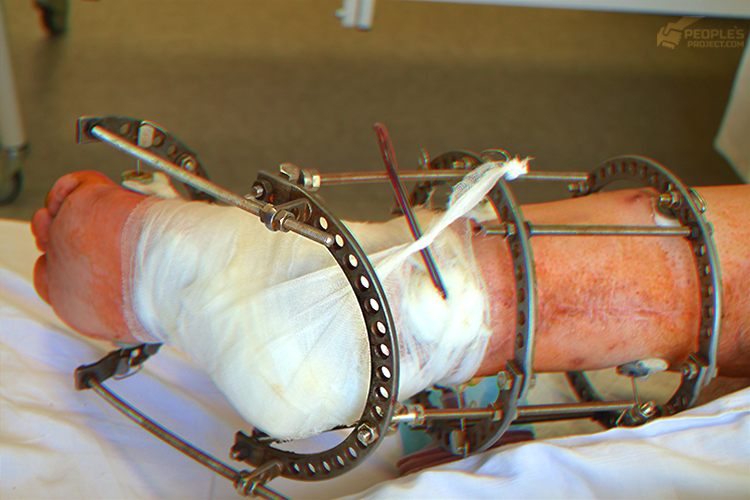 Maybe still wearing metal, but shortly Volodymyr will be able to walk on his own legs!

Volodymyr used to serve in the 93rd Mechanized Brigade, and in July of 2015 he had struck an enemy landmine while on reconnaissance outing. Miraculously, the explosion did not tear out the entire leg, still the heel bone got accurately cut off like with a knife. Doctors in conventional hospitals proved powerless: even in a German military hospital they maximum recommended to use a special orthopedic boot for Volodymyr’s leg lacking its heel bone and looking like a fin then. 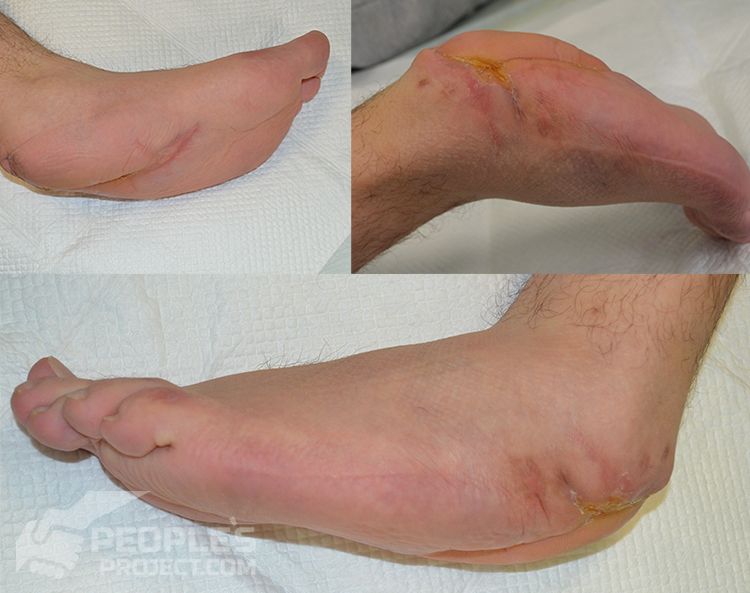 Later, when at the Bioengineering Rehabilitation for Wounded project, its doctors grew up a new completely functional heel bone for Volodymyr and attached it into the defected area by means of screws, and to make it grow in faster and better they saturated both the bone itself and the place of injury with special cell concentrate aimed to accelerate heeling: this concentrate is designed to turn into the bone tissue over time as well. Alongside with that the doctors restored soft tissues of the leg by means of reconstructive surgery with transplantation of skin fragments taken from other parts of the body. Thus Volodymyr has become the Project’s first patient owning a hairy heel – a matching fragment of skin and subcutaneous tissue was taken from his ankle.

In the course of treatment, the doctors had to adjust the entire plan quite a lot. The matter was, it is the heel bone that makes a major hub where all the important ligaments enabling the foot to move while walking, are joined. As soon as Volodymyr’s heel bone got severely injured, it would be only logical to perform arthrodesis, that is to firmly attach the feet to the shin, to fix it in its almost natural position for Volodymyr to learn how to use it while walking. But luckily, during another operation the chief surgeon of the Project Mr. Volodymyr Oksymets found out that this major ligament remained intact, and moreover – there also was a tiny fragment of the heel bone attached to it! 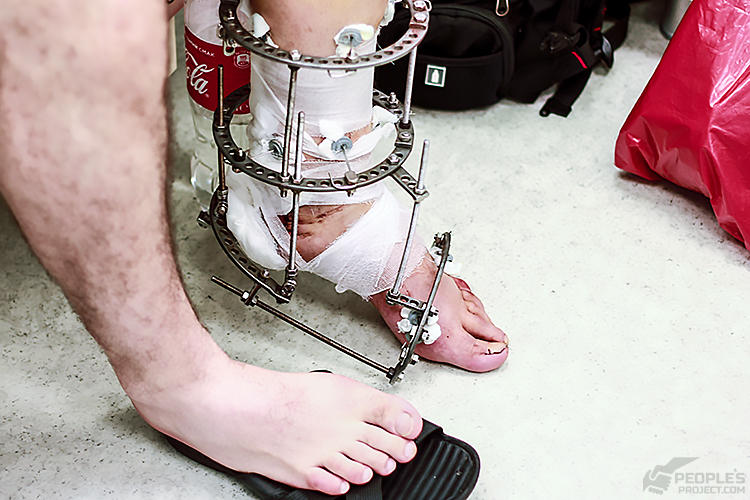 This is how the ligament was stretched in length, – by means of an external apparatus

In the course of additional stage of treatment, the doctors extended the ligament up to its proper length (they had to because of the ligament’s unescapable shortening that happened while the bone was treated and the corresponding muscle remained motionless. Lately that tiny living fragment of the heel bone has been attached to the bone newly grown at the lab, and the ligament was temporarily attached to the adjoining tissues to keep it safe and avoid injury due to sudden shortening – until it gains enough strength and grows into the adjacent tissues well. 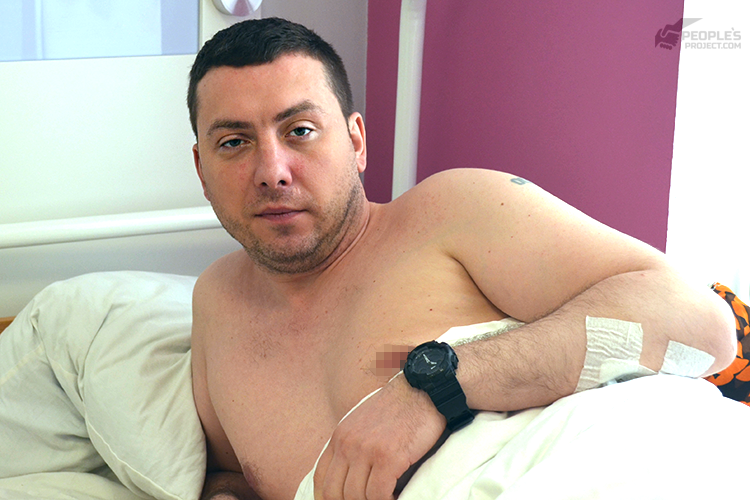 Now Volodymyr got all the chances not only to limp on the injured leg but to move completely: to jump, walk, move his feet around – all the things that feel normal for an ordinary able-bodied person. And we are just happy about this: can you see, dear friends, that each penny of those over 800 thousand UAH we together raised for the man’s treatment, were spent for a very nice thing and changed the life of another good man for the better.

However, the Bioengineering Rehabilitation for Wounded project has still been far from its completion, as there are other wounded fighters who still need our support. Please look through the Project’s description and reports: there you will find materials on a few injured defenders for whom our assistance is still essential. Unfortunately, conventional medicine abandoned them a while ago, so there is nobody left to support them unless we will. Dear friends, we really need your support – please join in!