“It is your fault”. How veterans fail to get land because of template inaccuracy

We proceed with informing you about the potholes the complicated matter of obtaining the land contains. We have already told you about the phenomenon of the office #219, still this was only the beginning of the long way along the narrow (for an ordinary citizen) bureaucratic corridors. A lawyer who has been engaged in supporting the ATO veterans for another year in a row, shares life hacks allowing veterans to go through all circles of bureaucratic hell in his way to obtaining a land plot guaranteed by the law.

A year ago, on April 20th, 2017, Kyiv City Council (Kyiv Rada) took a decision “On approval of the order of obtaining rights to land of communal ownership in the city of Kyiv”. Everything is absolutely logical here: there is a law – consequently, we need an order. The text was approved, and standardized templates (petitions, statements, etc.) our veterans had to follow while filing their papers to Kyiv City Council for obtaining land, adopted as a supplement. Here is where the cheating starts.

The forms looked absolutely normal, so our fighters downloaded them from the official Kyiv Rada’s website, filled them in (then they were doing this without legal support), added all the required documents and filed these to Kyiv City Council via local non-governmental organizations.

Filing the docs for the first time failed. The reason was: the wrong address of application, because it should have been done via the office #219. Ok then, the improved papers were sent by post with indication of the office #219 in the address line. A breath out: it should have worked for sure as it was done in strict correspondence with the order. But… a fighter did not mention that he agreed to processing his personal data (in accordance with Ukraine’s law “On protection of personal data”). That was a mistake. Still, those are the rules, and the official who was defending them, remained as relentless as a guard. Of course, another attempt to file the papers failed. Because the fighter himself did not give permission to process his own personal data! 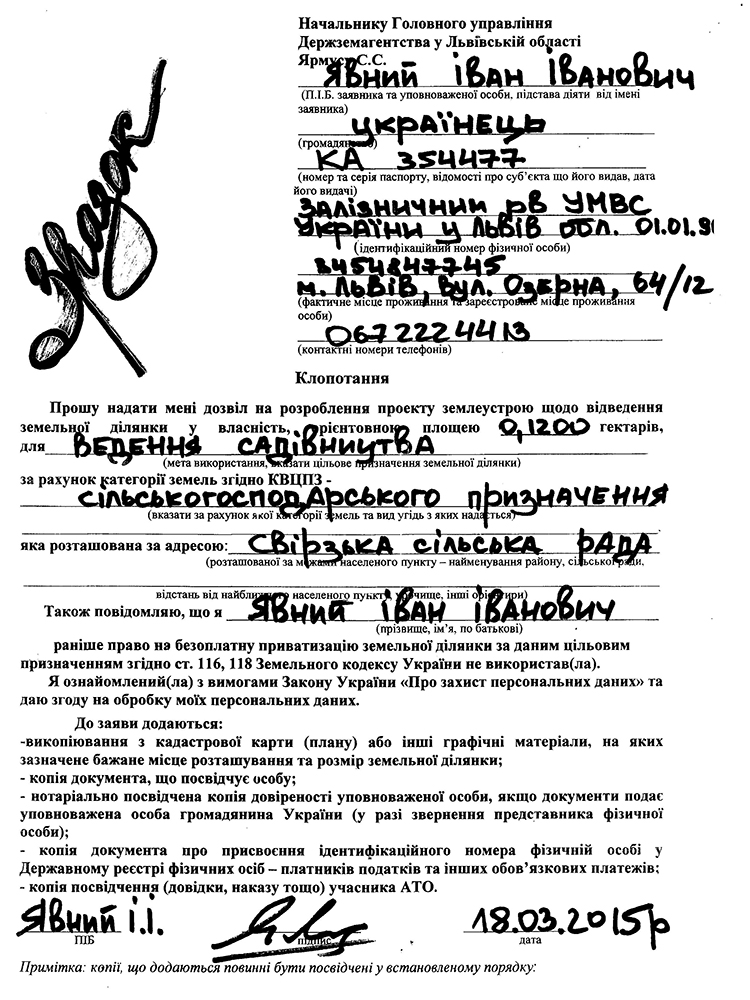 As you can see, a template contains no indication of any agreement to processing and use of personal data. Therefore, an official has no rights to accept such an application!

“How is this possible?” – the guys resent. “I have filled in the template approved by the city council itself – it was not me who invented this form!” Still neither the template nor its appendix contains any clauses concerning permission for personal data procession. Quite often the military try to file the documents while they are on leave or undergoing treatment in a hospital, that is in between “war and war again”. Naturally, they do not have enough time to do everything 100% right from the very first attempt having avoided all bureaucratic traps.

Perhaps, at the same time some Mr. Moneybags comes to certain official and tries to file his documents for obtaining land. Probably, in a whisper they recommend him to add necessary permission for personal data procession onto his papers. And, as if by magic, his papers get approved at once! Well, it is just nothing, still it is the trifle deliberately designed to add hindrances to the process.

Let me remind you that in a 2014, when Ukraine was on the brink of a collapse, and volunteers shoulder to shoulder with the AFU and National Guard’s fighters stood up for our fatherland, the then frightened government adopted the law “On amendment to the Law of Ukraine “On status of war veterans and guarantees of their social protection”. According to this law, the individuals who participated in the ATO, gained the status of combatants, which, in turn, entitled them with the right for obtaining a plot of land for free. Such decision of the government was justified and proven by the time. This was the principle any army used to stick to since the Roman Empire years, and this practice stays adopted throughout the world until now. As appropriate reward for bravery and devoted service in the name of a fatherland makes the cornerstone of any army.

Dear friends, we will keep informing you about the tricks of the bureaucratic wars for land our military are participating in. Let us also remind you that the lawyer we hired to protect the veterans’ right to land, is now engaged in 171 cases. He stays rather enthusiastic, but… Dear friends, at the moment we still owe this effective professional a part of his salary – currently the deficit makes about 12 thousand UAH. So we are begging you to join in the Legal Aid project and support it, as the work of just one lawyer will enable hundreds of veterans to obtain their plots of free land guaranteed by the law!