Home/Bioengineering Rehabilitation for Wounded/Report/Saving Petro from amputation: the guy’s next…

Saving Petro from amputation: the guy’s next stage of treatment within the Biotech has started

Dear friends, we have got news for you. It is good and bad at the same time. Let us start with good things first. Treatment within the Bioengineering Rehabilitation for Wounded has brought its first positive results: today we can say for sure that we did save Petro from amputation. Over the past nine months the doctors of the Project performed about ten surgeries, so the Biotech managed to save the guy’s leg, previously torn into pieces. Despite the fact the reconstructive surgeries still have not been finished yet, soon Petro is to undergo the most difficult and unpleasant surgery after which he will remain hobbled for a while, for a fragment of his skin to get transplanted from the guy’s one leg to another. Still, this stage is to be completed soon. 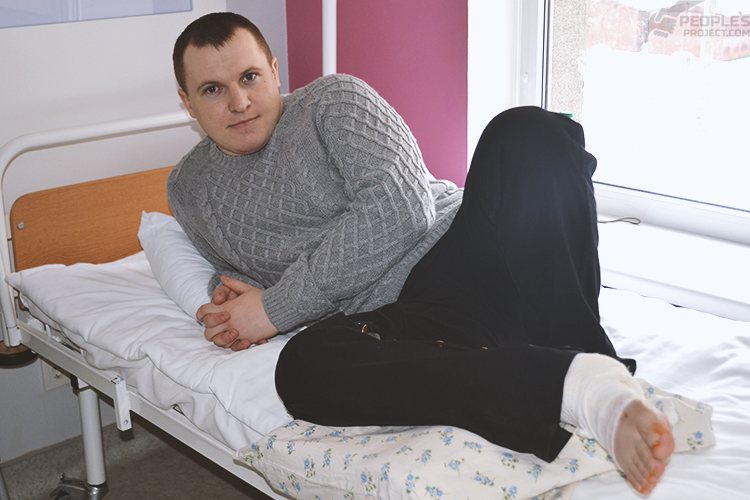 As long as this stage is almost finished, and the massive of soft tissues practically restored, it is time to start a new phase dedicated to restoration of the bone structures: the doctors will grow up a new heel bone and re-assemble the bones of Petro’s foot. We are certain that the guy will be able to walk on his own two legs soon – maybe not tomorrow, still he will definitely walk. 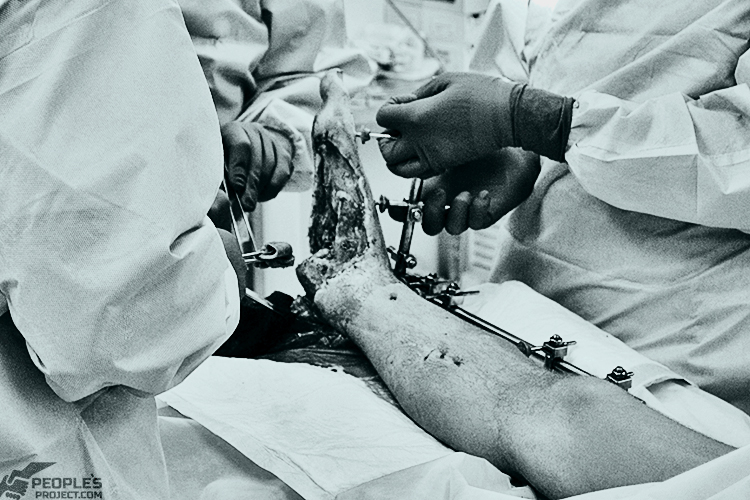 Petro is a paratrooper with the 90th battalion of the 81st Airmobile Brigade. In last May the guy stepped the russian anti-personnel landmine laid on the side of the path. If not this stout footwear, Petro most probably would not have escaped death: despite the explosion torn off a major fragment of the foot along with the heel bone, the injuries could have been much heavier, as usually such blast cuts the entire limb off leaving a fighter severely wounded, and then a massive blood loss finishes everything soon. Still, even without this, his foot looked horrible: just check out for yourself, but be warned that the pics look rather graphic.

At military hospitals, medics just examined that mess into which the guy’s leg turned, then shrugged their shoulders and appointed the date of amputation. At the same day all of us, friends and volunteers, literally pulled Petro from the surgery table and talked the pale and exhausted guy into trying out his last chance – joining the Bioengineering Rehabilitation for Wounded project within which medical specialists were going to restore his leg. 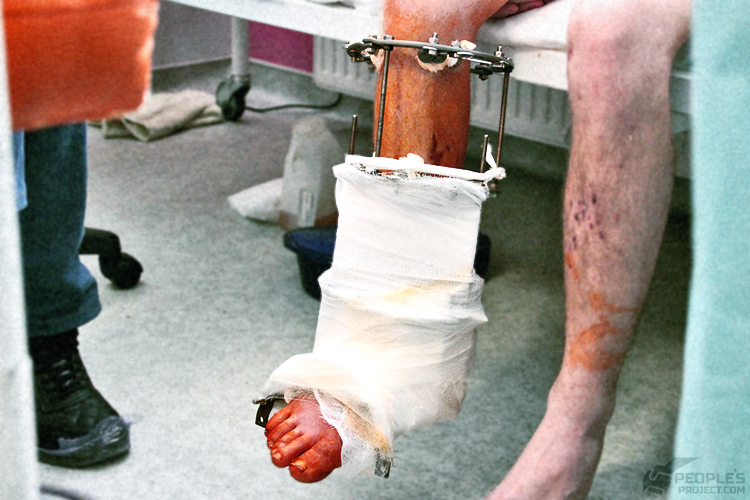 Now to the worse side of the matter. Restoration of such scaled injury requires enormous expenditure. As you can see in the fighter’s status, People’s Project launched fundraising for the next stage of treatment. Now we need to accumulate a lesser amount, about 300 thousand as compared to the 800 thousand we have already paid. Thus, at the moment total sum amounts to over one million hryvnias: for today Petro seems became the Project’s most expensive patient. 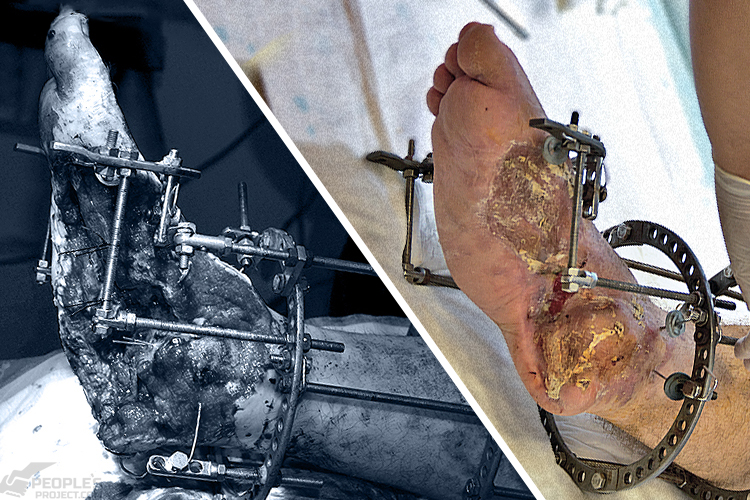 The picture on the right is not the latest one: as of today, the doctors did a lot more work. Still even here, the difference is striking

However, it would be totally wrong to leave the guy on his own: especially since his chances for restoration are great, to waste them leaving the young hero facing his troubles on his own would be just immoral. There are almost 40 millions of us, Ukrainians, and if each donates just one hryvnia, the sum would be enough to get treated not only Petro but forty wounded guys abandoned by state medicine due to extreme complexity of their injuries. Moreover, Petro himself has been actively engaged in fundraising: lately he earned and transferred us another over 30 thousand hryvnias. But what a shame when a wounded veteran, an ATO hero has to accumulate money for treatment on his own.

Dear friends, please do not hesitate to participate in the Project: can you see that everything goes like in airborne troops: “nobody but us”. Let it be just a hryvnia, ten, a hundred – any amount will be appropriate and welcome as all this money is highly significant. Petro and the rest of the Biotech’s patients got severely wounded for us to be protected from the war, for us to live a peaceful and secure life. So to prove supportive for them in gratitude for their commitment to duty is the matter of honor for each decent citizen. Still we are sure we can do it, can’t we?