Home/Bioengineering Rehabilitation for Wounded/Report/Walking with no support. Formerly desperate fighter…

Walking with no support. Formerly desperate fighter saved by means of «futuristic» technology

Can you recollect how many times we told you about Oleh? The doctors cleaned the wound. The doctors sorted out the bones. The surgeons restored the limb. Luckily, the prolonged and painful treatment is over. And Oleh arrived in the clinic for his regular check-up. Still, he came on his own two legs, with two full and living arms, as the course of Oleh’s treatment within the Biotech has been completed at last! 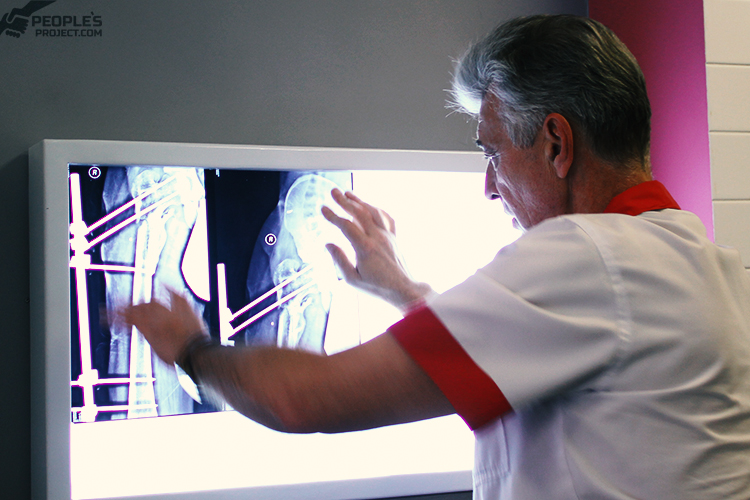 Oleh’s case has become a truly triumphal success for Volodymyr Oksymets. Despite rather outstanding statistics of the Project’s achievements, restoration of such injuries was a real challenge

One of Oleh’s latest plates was removed yet in July. The doctors planned the removal for the autumn, still the hip bone successfully fused, so they decided not to postpone the surgery. Well, the change in the status was quite insignificant, still the results turned out to be striking. In Oleh’s particular case the disassembly of the plate allowed the guy to train his leg much more actively. Today Oleh confidently walks on his own legs. He got rid of the crutches and a cane, – and makes not just a few steps taking a rest after each interval – but securely moves himself even for long distances.

Starobilsk, the beginning of the war. In many pictures we can see hot then unarmed Oleh among the rest of volunteers bravely opposes the armed separatists

Oleh, the volunteer of the Aidar Battalion, has suffered greatly in the war. It was Oleh who had retaken that water cannon at Maidan. It was he who chased away rabid armed separatists in Starobilsk. It was he who tried to guard Ukraine on the line of relatively peaceful resistance. So it was fairly logical that from the very first days of it, Oleh volunteered to the war. 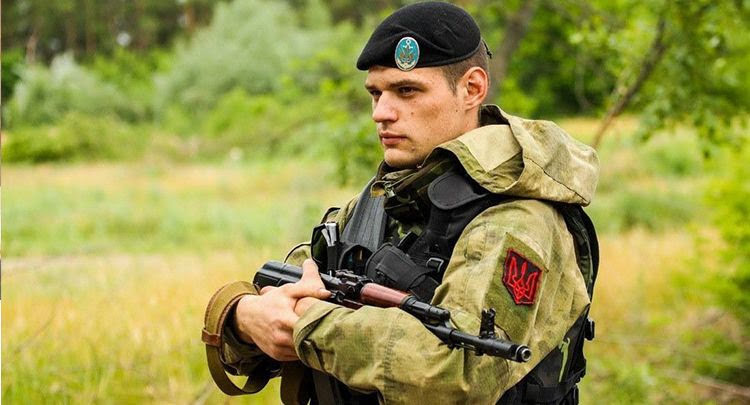 Later, it grew into more serious standoff: in the battle near Lutuhyne a tank shell directly hit the group of the guys. All of them had been killed except for Oleh – his comrade saved the guy’s life having covered him with his own body. But Oleh got severely injured by 19 shell fragments that cut all his body over and heavily damaged his arm and leg. 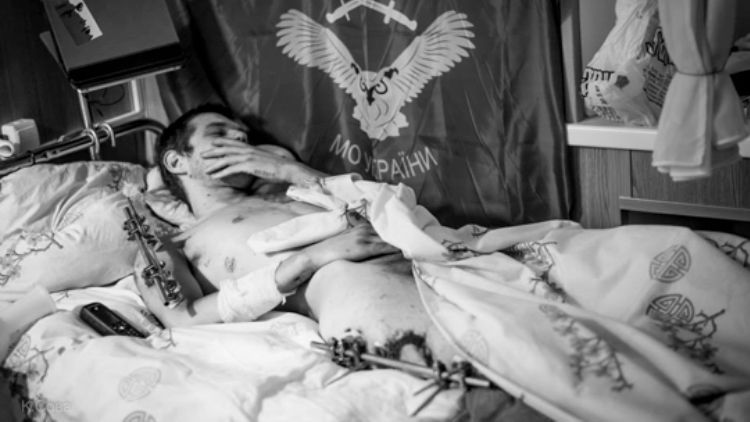 Naturally, first the doctors tried to save his life as for a long time OLeh had been balancing between on the edge, repeatedly dropping into the other world. Luckily, he did not give up, and after a certain period of time the doctors managed to stabilize the guy’s condition. 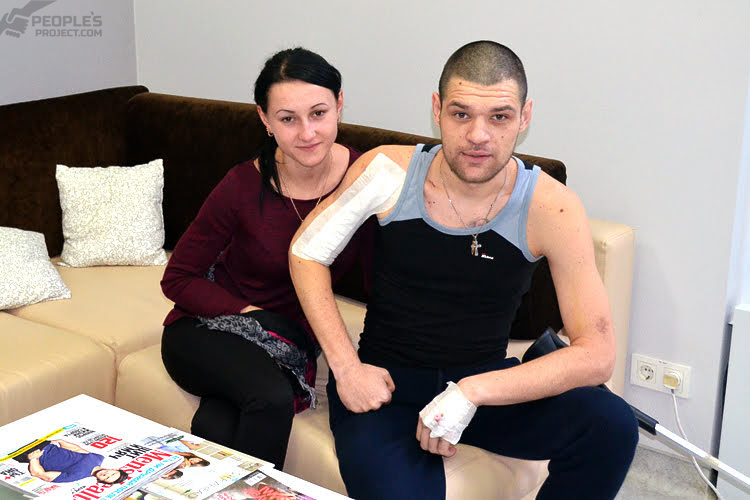 There is an exceptionally moving fact in their story: following the seven days in a coma, immediately on regaining consciousness Oleh called his girlfriend and proposed to her. Not hesitating for a minute, Mariana said “yes”, which afterwards played a decisive role in the guy’s recuperation. 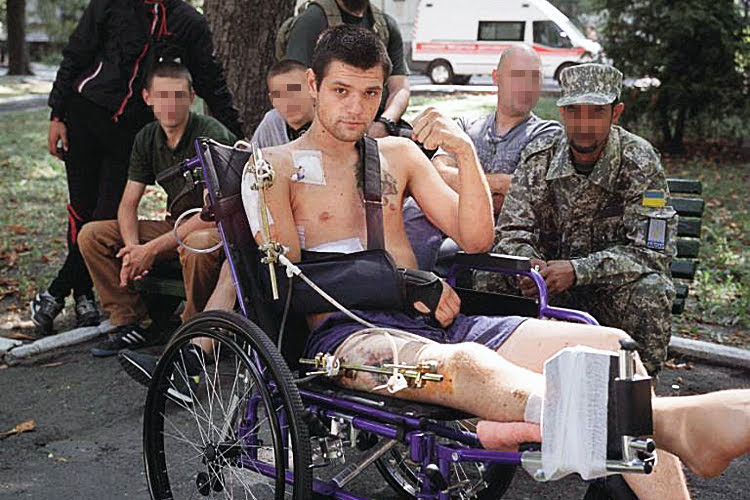 Still, it was absolutely unclear how to treat the guy’s leg and arm smashed out by the explosion. His body, exhausted by half-a-year treatment, just lacked resources for rebuild of the injured limbs. Twelve centimeters of the destroyed shoulder were a total mess. Three centimeters of heavily damaged hip. A crooked foot. All these parts had been assembled together and fixed by means of the Kostiuk apparatus, a cumbersome metal construction of bars and screws that kept the arm and the leg in their more or less physiological position. Doctors seemingly just did not know how to treat such injuries. 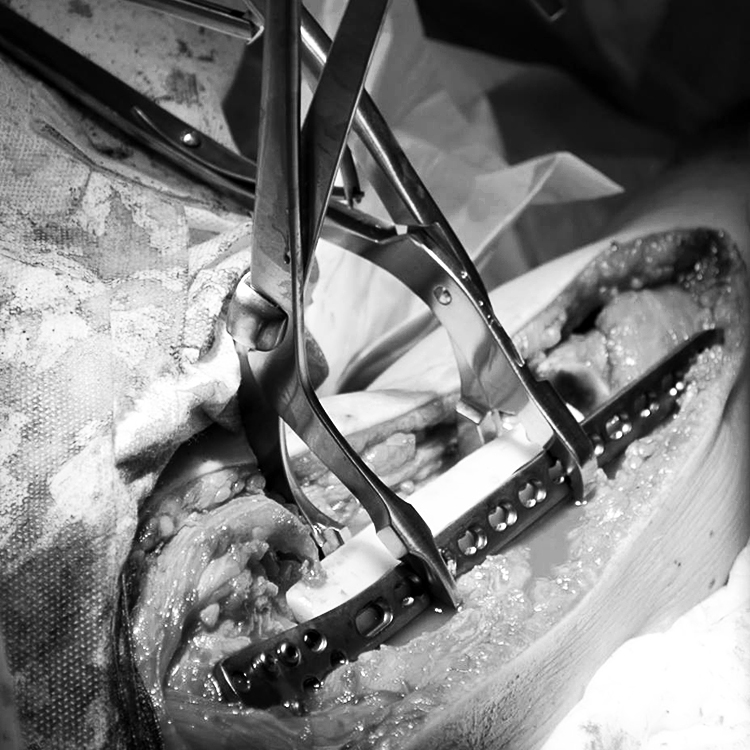 This was the Biotech that proved helpful. While Oleh’s organism was gaining strength, the biologists of the Project took his cell materials and started to work on them. At their laboratory, out of just a few cells, they cultivated the necessary amount of cell materials for further treatment, and prepared new fragments of the lacking bones.

This picture shows the dynamics of the shoulder bone fusion. The pics had been taken after a month and a half, half a year and a year following the start of the treatment

Complicated fusions got fused up; the lacking parts replaced with the fragments cultivated at the lab, and the damaged areas filled with cell concentrate. Normally, a human body is able to produce the specific cells responsible for restoration of the bone and other tissues called MMSC (multipotent mesenchymal stem cells). But an exhausted organism is often unable to produce the sufficient amount of the cells. This is where the Biotech’s methods prove efficient. 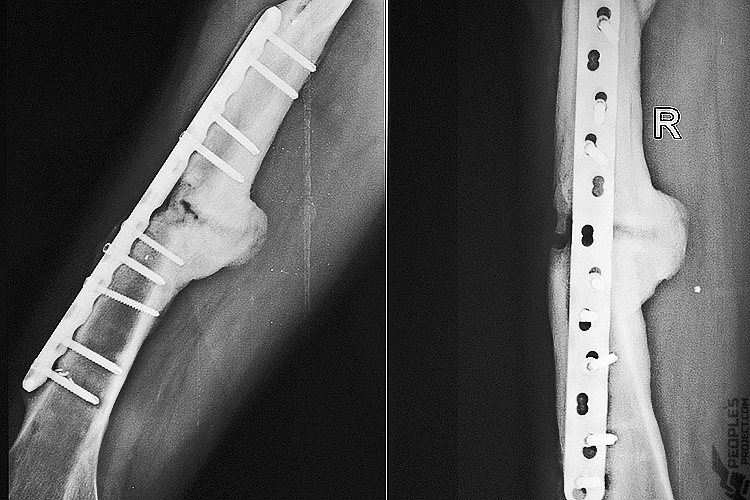 And this is the hip bone that got fused up. Maybe it looks not that perfect yet. Still it got restored which allows the guy to walk in full, despite all former gloomy prognoses

The cell concentrate has predictably fused up the complex fractures fast. Perhaps the complete course of treatment took over a year, still in view of the complicatedness of the guy’s injuries and bad prognoses, it is a medical miracle. Today Oleh has practically returned to a normal life and is now planning his own future with confidence. 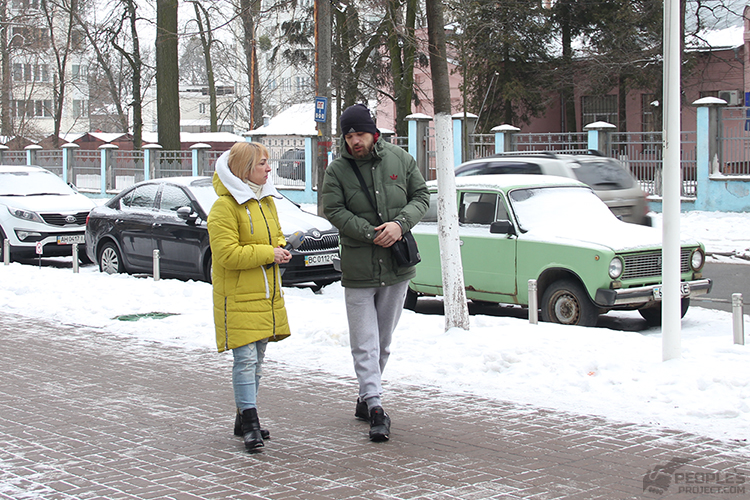 We are urging you not to leave our wounded defenders in trouble: often their hardest stage of war starts right now, in hospitals’ wards; sometimes, destroyed human lives are buried under heaps of medical papers. And a charitable project titled “Bioengineering Rehabilitation for Wounded” often gives these wounded their last chance: we just cannot allow to waste it due to our possible indifference. Dear friends, please join us and be supportive – your benevolent contributions do save people’s lives!