“There was no comfort in revenge”. Anniversary of fierce battles for Heorhiivka and Lutuhyne

“There was no comfort in revenge”. Anniversary of fierce battles for Heorhiivka and Lutuhyne

On the 27th of July of 2014 Ukrainian military took control of Heorhiivka and Lutuhyne. These battles proved to be among the war’s fiercest and most important fights. Luhansk was almost completely surrounded by our troops. Aidar battalion fighters recollect that it was professionals who worked at them from the other side then. The territory was practically open, so the chances for escape were minimal.

“Eight people got killed immediately. The rest tried to find some shelter behind the surrounding buildings, but next a deadly accident happened. While trying to repair the machine gun that got jammed, under the enemy fire, the tank commander was killed and fell into the tank hatch. It was unclear what exactly happened next, still there was a gunshot audible immediately. Two other fighters were killed by it. The remaining fighter ran to the main group and took an UAZ-452 “tablet” from them, then drove back and evacuated the wounded under shelling,” – Aidar fighters recollect. 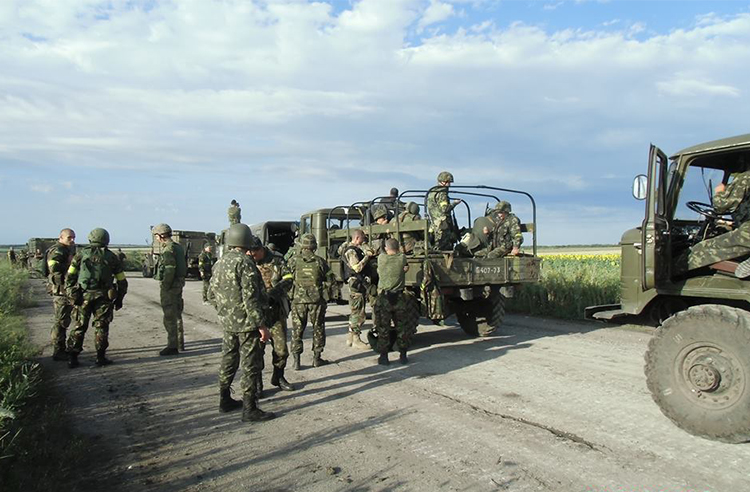 Aidar fighters are preparing for storming. The picture was taken on the 19th of July, 2014, a week before the tragic combat

It became quite clear that the HQ’s plans of taking over Lutuhyne all went to hell. Aidar’s company commanders got furious and corrected the initial plan drawn by their now late comrades. They took southern heights and having split into two groups attacked the enemy. “Like we got totally surprised by high concentration of separs (separatists), so they got shocked by an unexpected approach of our storming groups from their rear. We demolished their stakeout which allowed to deploy our armored vehicles,” – Aidar fighters commented.

Another group of volunteers was busy suppressing enemy mortar teams and manpower along the southern outskirts. “Terrorists ran away from Lutuhyne, Uspinka, Heorhiivka. We had 36 bodies and 20 arrested of them. Still this wasn’t a relief. The battalion lost 12 fighters then, including the company commander, lieutenant colonel Serhiy Kovryha.

In a few weeks, at this very place the Ukrainian Army started fighting against the Russian regular forces. In this heavy fighting, the ATO forces had to withdraw. And on the 25th of September the whole country got shocked by the news about 40 Heorhiivka residents killed by Russian mercenaries and local militants because of their support of the Ukrainian Army: for the moment when the militants entered the town, they already had their “kill lists” ready. Witnessed testified that the killing took place within the township, the bodies were covered by a layer of soil and then tamped down with heavy machinery.