Volodymyr prepares to take first steps after removal of apparatus

30th Brigade soldier Volodymyr’s left talus (heel) has been successfully restored and doctor’s are recommending the hero takes his first steps in 19 months. Meanwhile, Volodymyr is now at home recovering prior to the next control X-rays to monitor his progress in a months’ time.
Volodymyr – a fighter with the 30th detached mechanized brigade (from Novohrad-Volynskyi). He was wounded on July 27, 2014 while taking Savur-Mohyla. Volodymyr was wounded due to enemy shelling – almost the entire left half of the soldier’s body was wounded by shrapnel, however, the most affected was the left leg.
The only treatment performed on Volodymyr was the removal of debris and for more than a year the astragalus remained damaged. A walking stick was the hero’s constant companion as he was unable to place any weight on the leg due to severe pain. Without alternative treatment he was also threatened with aseptic necrosis of the talus. However, friends and volunteers never left him to face the problem alone and continued to seek solutions, once they learned about the Bioengineering Rehabilitation for Wounded project, they immediately advised the soldier to apply.
Volodymyr’s treatment under the project began in September 2015 when he was underwent a procedure to sample cellular material. On December 1 he underwent his primary operation, during which at the site of his talus defect was introduced 3D-gel with osteoplastic chip material and autologous stem cells, the foot was fitted with an extrafocal device for osteosynthesis of the bone.
For Volodymyr’s full treatment history follow this link. 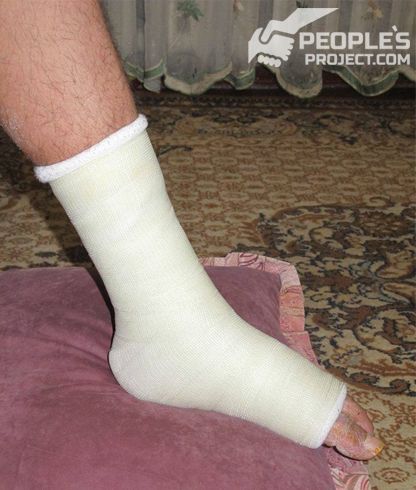