Volodymyr, 44. Treatment is in progress

Wounded near the city of Horlivka. Suffers from the consequences of an explosive injury to the right forearm – a bone defect about 10 cm. Money for the treatment raised.

19.12.2017: A paratrooper lacking bones in his arm needs our assistance

20.09.2017: Dnipro residents have raised funds for treatment of a wounded

30.08.2017: People's Project's volunteers have paid another bill for the Biotech's wounded soldier

21.08.2017: Homeward! The Biotech's new patient has successfully completed the first stage of treatment

16.08.2017: Waiting for Friday: Volodymyr gets prepared for the second complicated surgery

13.08.2017: Instead of amputation: a new bone is being grown for wounded soldier 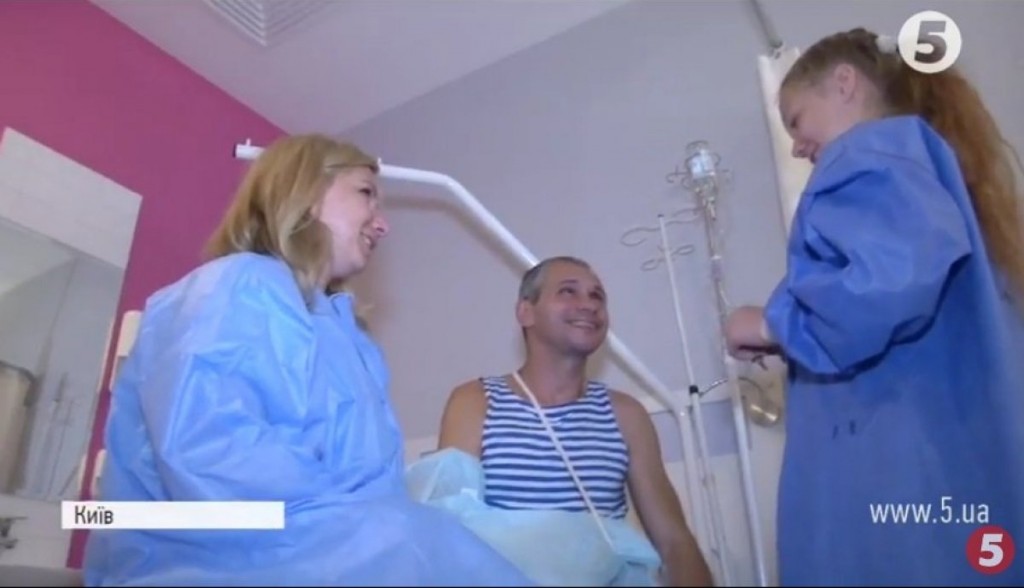 Volodymyr 44, a volunteer. He fought in the battalion “Dnipro-1”, subsequently signed a contract with the 25th brigade of the Ukrainian Armed Forces. He was injured in a combat mission between Horlivka and Zaitsev. Vladimir has significant defects in the bones of his forearm, which are practically impossible to cure well with the help of generally accepted techniques. In addition, osteomyelitis caused by shrapnel is progressing and steadily worsens the situation: it increases the bone defect and eventually can lead to the loss of the limb. Reconstructive and regenerative treatment with the use of cell technologies will help to overcome the osteomyelitis, compensate for the defect and restore bone integrity and, finally, maximize the function of the arm. Volodymyr was a volunteer, his friends know him better as a taxi driver, he went to the front at the beginning of the war. From May 2014 he served in the battalion “Dnipro-1”. After almost two years in the battalion, he signed a contract with the Armed Forces, where he served in the 25th separate airborne brigades. During this time, Vladimir passed through almost all the hot spots in the ATO zone. Volodymyr is well-known among the fighters of various divisions as a selfless and courageous soldier. He was injured on March 6, 2017, during a combat task between the settlements of Horlivka and Zaitsev. A 120-millimeter shell exploded alongside the fighters of his division. Volodymyr received a lot of life-threatening shrapnel injuries all over his body. His face, thorax, abdominal cavity and arm were the most affected. After the stabilization of the status of the fighter in military hospitals there was the question of restoration of the forearm. The defects of the bones exceeded 10 cm, in addition, the osteomyelitis continued to spread, which continues to destroy the bone tissue. Now we need to stop this dangerous process as soon as possible, and then restore the bones through biotechnology. Volunteers and journalists who are well aware of Volodymyr and sincerely asked for help from the project Bioengineering Rehabilitation for Wounded. After a review at the ilaya medical center, doctors proposed a treatment scheme that will help achieve the best results for such an injury. Volodymyr was born and lives in Kremenchug, in the Poltava region. He has a family – his wife, a 20-year-old son and a 12-year-old daughter. Before the war, he worked in various work: taught choreography, led a rapid reaction team in the security firm, and even was a taxi driver. Volodymyr is a very positive and courageous man. At a time when Ukraine needed protection, without a second thought, he went to the front. For three years, he has defending the state and paid the price. Now he needs help. We hope you will not leave this defender in trouble. Together we can effectively help Volodymyr. Reconstructive and regenerative treatment of the trauma of the bones of the forearm with the use of biotechnology.

Detailed costs of diagnosis and treatment:

Total cost of treatment including medical center discount of 43%: 672 268 UAH