Andriy B, 40. Treatment completed. Rehabilitation is in progress

Wounded near the village of Stepanivka. The consequences of explosive shrapnel wounds. Money for the treatment raised.

05.11.2018: Four years on crutches. Veteran of the 30th Mechanized Brigade gets chances for recovery 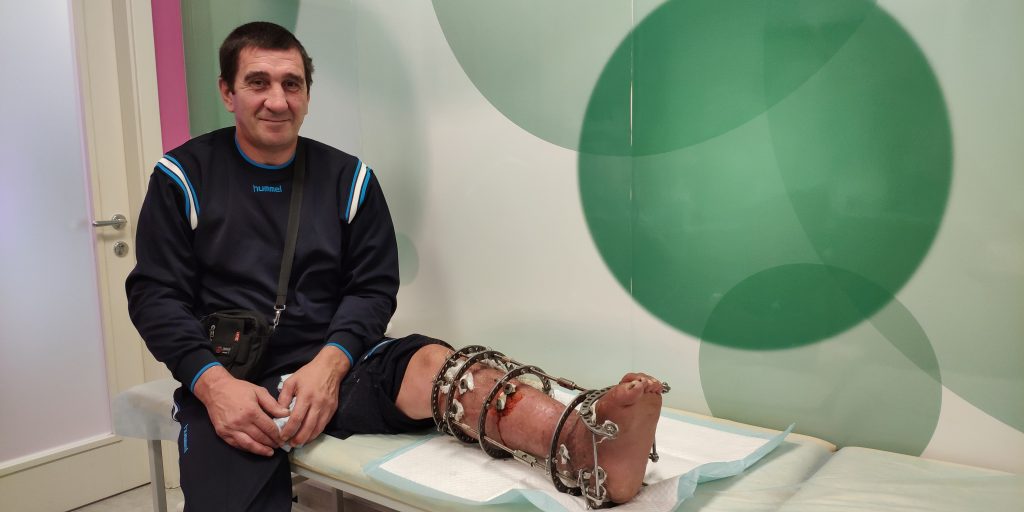 11.12.2017: Refusing to fuse up for three years: the Biotech becomes a way out for heavily wounded fighter

30.10.2017: Successful surgeries at the Biotech: another two fighters left the clinic on their own legs

10.11.2016: The bioengineers saved one more defender of Ukraine from amputation

01.04.2016: Fighters go through different stages of their treatment

Andriy, 40, fighter with the 30th Mechanized Brigade wounded near the village of Stepanivka, in the Donetsk region.

Left leg: the consequences of explosive shrapnel wounds, prolonged nonunion comminuted fracture of the distal meta-epiphysis of the tibia. After 1.5 years the tibia has not fused, this is complicated by continuing osteomyelitis. Further progression of this condition and infection can lead to amputation because of possible complications. Cellular technology will help save the leg and maximize the chances of returning leg function. Andriy, a mobilized fighter with the 30th Brigade (from Novograd Volyn), was wounded on August 13, 2014, by shrapnel in the village of Stepanivka, near Savur-Mohyla. While manning a checkpoint, he came under separatist tank fire. Andriy and three other soldiers were seriously wounded, Andriy suffered a severe leg injury, multiple shrapnel injuries and concussion of the body. The hero was treated in various hospitals in Kharkiv, Vinnytsya, and Zhytomyr, undergoing six operations, however, conventional medicine has not been able to offer a solution.
Andriy was born in Brusyliv. Before the war, he was involved in the installation of fences for local small businesses. He has two daughters and 1.5-year-old grandson. He was mobilized on May 17, 2014. During his service in the ATO he took part in combat missions near Savur-Mohyla. Had no Zhytomyr volunteers asked for help from the Bioengineering Rehabilitation for Wounded project, the soldier would have remained alone with his crippled leg as so often happens in small towns and villages. But now can all help the hero to return to a normal life. Budget update:
Before being enrolled in the ‘Bioengineering Rehabilitation for Wounded’ project, Andriy was treated in numerous medical institutions. Thus, he was fitted with an external fixation apparatus for too long. This resulted in inflammatory processes in his bone forcing doctors to perform urgent unplanned surgery. The cost of this surgery amounted to 29 864 hryvnias.

In 2016, after a number of complex surgeries and implantation of cellular material, Andriy’s non-union tibia fracture successfully healed. Now bone integrity is restored and Anrdiy can normally put pressure on the healed bone. However, in the course of rehabilitation, the change in bone’s gravity center was discovered. This prevents Andriy from walking properly and causes pain. To resolve this issue soldier requires additional corrective surgery, the cost of this stage amounted to 62 944 hryvnias.

After the main stage of the treatment of the nonunion fracture completed, Andriy’s thigh bone has healed. Now the bone integrity is restored and the wounded put pressure on the restored limb and has proceeded to the exercises. However, due to prolonged wear of the apparatus of external fixation the complication has occurred – osteomyelitis. The problem appeared itself during exercises and needs immediate treatment. Doctors have planned an additional stage during which they will remove the bone segments affected by osteomyelitis and fix it with the help of Ilizarov’s apparatus. The cost of two operations within the stage amounted to 107 472 hryvnias.

Unfortunately, during the first operation of the last treatment stage, a much larger fragment of infected bone was detected – the fragment had to be removed. This changed the further treatment tactics: after the operation, the wounded will pull out the bone with Ilizarov device, after that an additional operation will be required in order to align the elongated bone, and then – to remove the device. The cost of the intended additional surgical intervention will amount to UAH 67,869.

Cost of treatment including medical center discount of 35%: 586 269 UAH